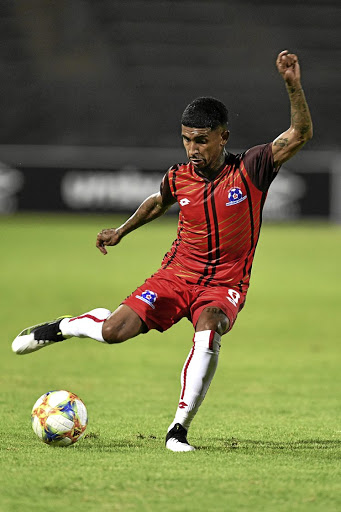 Keagan Buchanan, whose career has been threatened by a number of horrific injuries, has shown flashes of brilliance at Maritzburg United.
Image: Lefty Shivambu/Gallo Images

Gradually returning to the kind of form that earned him a big move from Bloemfontein Celtic to Kaizer Chiefs in 2016,

Buchanan, whose career has been threatened by a number of horrific injuries, has shown flashes of brilliance in the new campaign.

The lad from Cape Town already boasts eight league starts this season, while he only amassed four during his entire two-year stay at Amakhosi.

"Believing in my self is the main reason I am starting to return to my best form," Buchanan told Sowetan yesterday.

"I am in a better space now as I have been starting games. I am very confident that I can do more to help the team achieve its goal of finishing in the top five."

At the start of last season, Buchanan suffered a horrific knee injury that sidelined him for 12 months, jeopardising his Team of Choice future after joining the club as a free agent in July 2018.

"I hope I stay injury-free for the rest of the season because injuries have made it hard for me to make my mark.

"I want to continue repaying Maritzburg's faith in me by delivering on the field of play," said Buchanan.

The 27-year-old midfield man also reflected on his unsuccessful Chiefs stint, feeling it toughened him up as a player.

Buchanan also insisted there's no animosity between him and the Soweto giants.

"In football things don't always favour you... you must always look at the positives.

"For me, not playing as much as I would have expected at Chiefs made me stronger," said the Maritzburg midfielder.

"But still, I like the club and I have a very good relationship with everyone there. There's no hate at all because I understand how football works."

Maritzburg face struggling fellow KwaZulu-Natal side in the form of AmaZulu in a league encounter at Harry Gwala Stadium in Pietermaritzburg tomorrow (8pm).

"We must take advantage of playing at home. We know AmaZulu are desperate for points, but there's also bragging rights at stake, so it's a dog-eat-dog world," noted Buchanan.