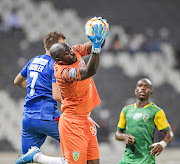 Ageing like a fine wine, Golden Arrows goalkeeper Edmore Sibanda, 33, is the true epitome of this adage. The Zimbabwean international seems to be getting better with age as it's only now where he's getting regular game-time, something that eluded him in his youth.

Sibanda proved his credentials when he started in the Africa Cup of Nations (Afcon) last year against hosts Egypt, where he picked up a knee contusion that all but ended his campaign. He was still on the books of second-tier side Witbank Spurs at the time, who were relegated last season.

"It was very special to start that game against Egypt. I can say that I didn't foresee that at my age I would still be going strong with the national team . it's amazing," Sibanda said.

What made his case at Afcon even more interesting was that he was preferred ahead of George Chigova and Elvis Chipezeze, who turn out for SA elite sides in Baroka and Polokwane City respectively, while he was still playing in the second-tier for Spurs.

"In as much as it's competition, it's just about pushing each other. We [he, Chipezeze and Chigova] are friends. After each and every game we talk to each other, sharing advice," said Sibanda. "I think what worked for me to go to Afcon was that people in Zim know me very well as I played for the Under-20 and Under-23 teams . it was all about the trust the country have in me."

Soon after Afcon, Sibanda joined Golden Arrows, still carrying the injury he sustained at the continental showpiece. Again, it wasn't too long before he claimed the Abafana Bes'thende No.1 shirt, toppling Nkosingiphile Gumede and Maximilian Mbaeva.

"When I came here I was injured. I never did a pre-season but the faith the club showed in me kept me going. I must thank Mbaeva and Gumede, they were so receptive, making me feel at home," said Sibanda, who boasts 13 league starts for Arrows so far.