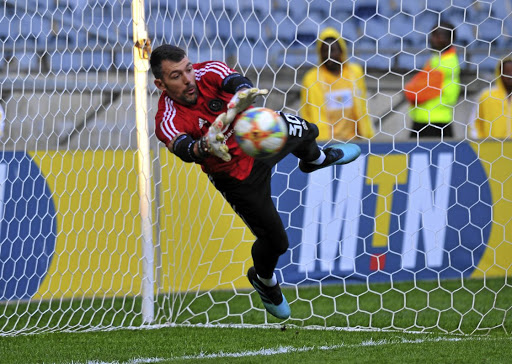 Orlando Pirates stopper Wayne Sandilands admits that the current campaign has been the most erratic in his three seasons at the club.

Sandilands joined Bucs in 2017 when the club was beginning a new era under Milutin Sredojevic and Rulani Mokwena.

After twice finishing as runners-up in the league, everything went downhill this season when Sredojevic abruptly resigned and Mokwena took leave after new man in charge, Josef Zinnbauer, arrived.

"It has been very challenging with coaches changing. It's not easy because every person has different ideas," Sandilands said.

"It has been challenging but there is a good vibe in the team and we are trying to salvage whatever we can from the season. To have three different coaches in a season has not been easy, but we have to soldier on."

The team's biggest weakness in recent times has been their leaky defence. They have conceded 23 goals in 16 games.

In the three games under Zinnbauer, Bucs have conceded three, which the 36-year-old feels is an improvement.

"The team is defending better as a unit.

"Defence is not about the defenders and the goalkeeper. We have been defending as a team and a collective and that has been a big positive.

"Not that we weren't working on defending in the past but maybe the way we do it now allows us to be more cohesive. It has been a focus point for us because we don't like to concede goals."

Bucs will be high on confidence after thrashing Polokwane City 4-1 in their previous game.

"Games against Sundowns are always tough. It's always an interesting game and it's a big occasion, which requires both teams to be on top of their game. It's one that the fans and players look forward to playing. It's always intense."

It is not Orlando Pirates’ job to do Absa Premiership leaders Kaizer Chiefs any favours in the league title race‚ Buccaneers winger Luvuyo Memela has ...
Sport
1 year ago

How Orlando Pirates 'season of redemption' turned into disaster

Zinnbauer trusted to resurrect Pirates
Sport
1 year ago
Next Article