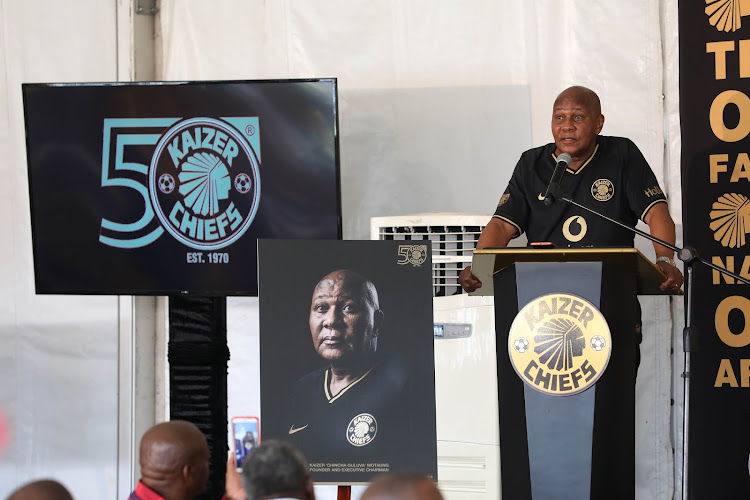 Chairman Kaizer Motaung speaks at the Kaizer Chiefs 50th anniversary in Phefeni on January 07, 2020 in Johannesburg, South Africa. Kaizer Chiefs is a professional South African football club that was established on the 7th of January in 1970 by Kaizer Motaung. The team is nicknamed Amakhosi and Phefeni Glamour Boys.
Image: Gallo Images/Sowetan/Veli Nhlapo

Kaizer Chiefs supremo reflects on the joys and pains of the 50-year journey of a club which grew from a garage to a phenomenon.

Happy golden jubilee King Kaizer. Tell us about the birth of this club?

The birth of Kaizer Chiefs came as a result of the fact that there were people who were homeless, so to speak.

And then, upon my arrival [from Atlanta Chiefs in the US, for a six to eight-week break], I made an effort to find out from the [Orlando] Pirates officials what could have happened and how we could resolve things.

At Pirates at the time, there was this division and emotions going around.

After a lengthy discussion, it looked like I was also being accused of siding with the affected people.

I said no; I'm not. I'm merely here to see if I can broker some kind of peace. But I soon realised I was not going to win. So then, during our discussions with people like Bra Lesley Sehume, a journalist, and some of his colleagues said, in the meantime, why don't you get these guys and organise a tour of the country while you're here.

And Kaizer Invitational XI was born?

Yes. Then this idea grew and then we said no; in fact maybe it's a good idea because now I'm not going to be accused of taking sides. With the help of Bra Les, we started organising the matches and the tours. And I must say Durban was our home away from home. So that's how the Kaizer XI started.