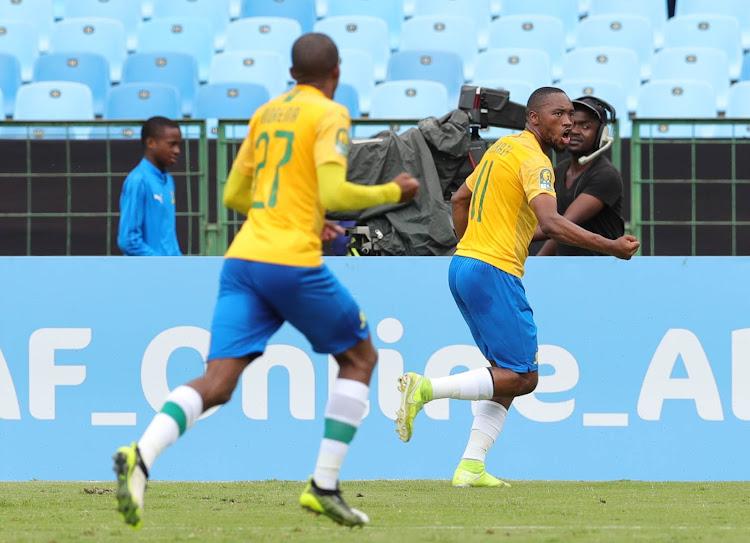 Sibusiso Vilakazi (R) celebrates after scoring the second goal. Behind him is Thapelo Morena, who was responsible for the opening goal.
Image: Mamelodi Sundowns FC/Twitter

Mamelodi Sundowns coach Pitso Mosimane says their rivals in the Caf Champions League dread trips to South Africa and are well aware that winning in Pretoria is a tough task.

Sundowns qualified for the quarterfinals of the Champions League with two games to spare after a hard-fought 2-1 win over USM Alger of Algeria at Loftus on Saturday and Mosimane said teams on the continent have immense respect for the Brazilians.

“They know that when they come to Pretoria it is not easy‚" he said.

"We control the game here and we always have a chance of winning here at home.

"I think in 2016 nobody really knew us‚ everybody said which team is this but now they know us.”

Morena and Vilakazi both getting on the scoresheet yesterday and ensuring that the Brazilians book their place in the CAF Champions League quarter-finals!???⁣
⁣
Mamelodi Sundowns (36' Morena, 45'+1 Vilakazi) 2️⃣➖1️⃣ USM Alger (44' Mahious) ⁣
⁣#Sundowns #CAFCL pic.twitter.com/D74xfCvSl6

Mosimane was happy that his charges ticked the important box of defeating a strong North African side after beating USM Alger home and away.

“It is for the first time in our history that we have qualified for the knockout stages with two games to go and we have once again beaten a North African team home and away‚" he said.

"We haven’t been winning away games in North Africa but we broke the ice against Zamalek in 2016 and we have done it again against USM.”

Sundowns rode their luck in the match as Alger attacker Mohamed Meftah hit the woodwork from the penalty spot four minutes from time‚ which could have denied the home side the vital victory.

“They missed a penalty and they could have scored to be honest‚" Mosimane said.

"But I can also say how many chances we missed to increase the score.

"The game went as we expected but we controlled it.

It's a battle for top spot between Mamelodi Sundowns and Wydad Casablanca in Group C. #CAFCL pic.twitter.com/RozToZmw8E

"The opponents are strong in terms of aerial strength and crosses.

“We controlled the game and we tried as much as possible to keep possession through our two sixes in Andile Jali and Hlompho Kekana.

"Their job was to come out with the ball from the back and try to tire their strikers.

"We achieved that but our penetration was not as strong as our dominance on ball possession.

"What is important is to qualify and we have done that with two games to go and I am happy with that.”

Sundowns will now turn their focus on their league campaign when they travel to Orlando to face a resurgent Orlando Pirates on Wednesday.