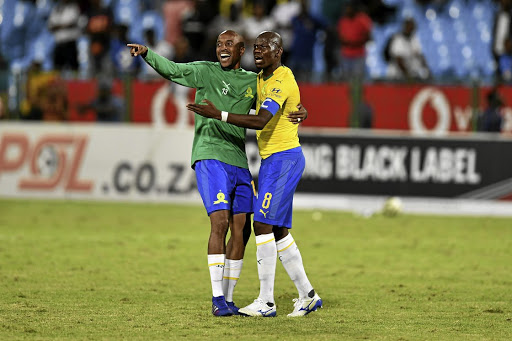 Mamelodi Sundowns midfielder Tiyani Mabunda has backed Hlompho Kekana to go on to set a new appearance record for the club.

Kekana is on 302 appearances for Sundowns. On Tuesday he was honoured with a plaque for reaching the triple century milestone.

The current appearance record holder for Downs is Daniel Mudau, who has 390 caps for the Brazilians.

"I have no doubt that he can go all the way. He has got the ability and has the legs to take him there," Mabunda said.

"I think he can go until 40. Nobody can doubt his contribution to the club and to the game in SA. I foresee him going on like this for many years to come. Some of us are just grateful to witness such a role model and true professional at his best."

Kekana, 34, will arguably go down as the most successful skipper in the history of the club. Since becoming captain in 2016, the Zebediela-born workhorse has lifted two league titles, the Telkom Knockout (2019), CAF Champions League (2016) and CAF Super Cup (2017).

Overall, he has played more than 400 domestic matches having represented Black Leopards, Bloemfontein Celtic and SuperSport United as well.

Downs are looking to add another Champions League title to the cabinet. They are currently top of Group C with seven points from three games.

They could all but secure their passage to the knockout phase when they face Algerian side USM Alger at Loftus Versfeld on Saturday (3pm). In the reverse fixture in Algeria last month, the Chloorkop-based outfit edged USM 1-0 courtesy of a strike from none other than Kekana.

"It will more difficult than the first game we played against them because they will want to win to keep their hopes alive in the group," Mabunda felt.

"We know what will be expected from us in the game. We have been playing in the competition for the past five years."

*Bidvest Wits will take on Al Nasr in the CAF Confederation Cup in Egypt on Sunday.