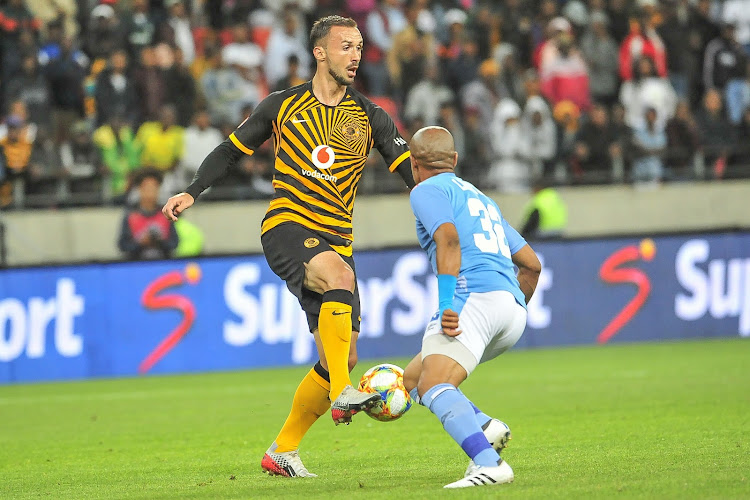 When Samir Nurkovic was told that he was behind the leading goal-scorers by two goals in the race for Lesley Manyathela’s Golden Boot Award‚ the big Kaizer Chiefs striker protested.

“No‚ am I not two behind‚ I’m one‚” said an adamant Nurkovic even gesticulating with his finger. “I’m just one behind‚ right?”

When Nurkovic was politely informed that Orlando Pirates striker Gabadinho Mhango’s hat-trick shot the Malawian’s tally to 10‚ the Serbian marksman shrugged his shoulders and smiled.

At the time TimesLIVE caught up with Nurkovic at noon on Thursday at the Chiefs Village in Naturena he was also not aware that AmaZulu FC striker Bongi Ntuli had scored a brace when his team drew 2-2 with Cape Town City on Wednesday night.

That took the Usuthu striker on par with Mhango‚ who had scored his hat-trick on Tuesday night against Polokwane City.

“Okay‚ it’s a very good competition about the goal-scorers‚” said the Chiefs striker.

“I’m very happy to have somebody to chase. We’ll see. I’m going to try my best and score as much as possible.

“But‚ like I said a couple of times before‚ the team comes first. If the team is winning than the individuals will also get something.

“But as a striker‚ of course I would like to be a top goal-scorer at the end of the season.”

Charlton Mashumba of Polokwane is the other PSL striker apart from Mhango and Nurkovic to score three goals in one match this season – a campaign in which goal-hunters are promising to score much more than 15 goals to bag the Lesley Manyathela Golden Boot Award.

The debate about the goals showed just how much Nurkovic itched to be on the pitch at FNB Stadium on Wednesday night when Chiefs celebrated their 50th birthday with an emphatic 3-0 victory over Highlands Park to move six points clear on top of the Absa Premiership.

The Serbian striker missed the occasion because he was on four yellows and was therefore unable to add to his eight league goals that include a hat-trick he scored against Bloemfontein Celtic when Chiefs beat them 5-3 in Durban last year.

“Part of my heart when I watched the match from the stands was sad and the other part was happy‚” said Nurkovic of Wednesday’s festive atmosphere that was amplified by the club’s decision to allow Chiefs fans to get in free of charge to mark their golden jubilee.

“This is the most important thing in the end – to collect as many points as we can‚ especially after the defeat against SuperSport on Saturday.”

Nurkovic said he was ready to help his club in their home game against Cape Town City at the FNB Stadium on Sunday after missing the Highlands match through suspension.

“I’m looking forward to that game against City and will be hoping score some goals‚” he said of the match in which Chiefs have a chance of completing a double over the Citizens after beating them 2-1 in Cape Town in the first round.

“First of all you have to respect the opponent. We’ll play our game and see. They also have good players‚ so we’ll see.”