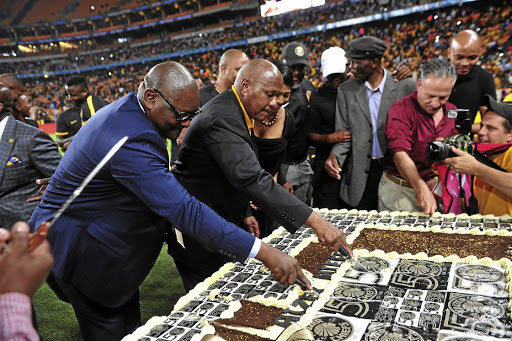 In the thick of their run-in to the title, Kaizer Chiefs coach Ernst Middendorp looks to have drawn attention to avoiding a squad mutiny by giving even fringe players some playing minutes.

This became evident in Amakhosi's 3-0 win over Highlands Park on Wednesday, where Siphosakhe Ntiya-Ntiya, Kgotso Moleko and Lazarous Kambole made a rare start, while nearly-forgotten Ramahlwe Mphahlele, making his only second appearance of the term, also made a cameo appearance to play the final 25 minutes.

"I can [say] we have a very happy environment in our dressing room, there's no doubt about that. We have a certain number of players we are trusting and believe that with them we can achieve what we want," said Middendorp.

"Of course, players like Ntiya-Ntiya and Moleko were in the XI for the first time... and that was definitely not an easy task, in particular with a game of this magnitude [referring to their 50th anniversary celebrations]."

Kaizer Chiefs are lining up one big signing in the January transfer window‚ chairman Kaizer Motaung has revealed.
Sport
2 years ago

In the same breath, the Amakhosi mentor also suggested his fringe troops must keep level headed, reminding them they are still down in the pecking order.

"We're working with them [fringe players], they know what to do. We are really putting them into a frame to say 'okay, let's make it simple, make it easy. contribute' and then, of course, don't underestimate, we've a certain set-up of core players. We always talk about Daniel Cardoso and Eric [Mathoho] in the defence."

It was Leonardo Castro's double, alongside a beautiful bicycle strike by Mathoho that propelled Chiefs to a convincing win over Highlands, amplifying their golden jubilee commemorations and stretching their lead at the top of the log to six points.

The Soweto giants have since switched their focus to their next league clash against an indifferent Cape Town City side at the same FNB Stadium on Sunday [3.30pm].

"They [City] brought in a defender [Giannis Potouridis], very, very qualified in organising the back. That was one problem they had before. But we prepare ourselves with certain respect, hopefully we will make it," noted Middendorp.

Out-of-favour Kaizer Chiefs midfielder Kabelo Mahlasela has joined Polokwane City on a five-month loan until the end of the season.
Sport
2 years ago

Kaizer Chiefs intend to kill two birds with one stone when they host Highlands Park in a league encounter at FNB Stadium tonight (7.30pm).
Sport
2 years ago

Kaizer Motaung to the Chiefs players: 'You have an opportunity to redeem yourself'

In a clear reference to their 2019-20 Absa Premiership title race‚ Kaizer Chiefs’ chairman Kaizer Motaung has urged the current team to “write their ...
Sport
2 years ago
Next Article