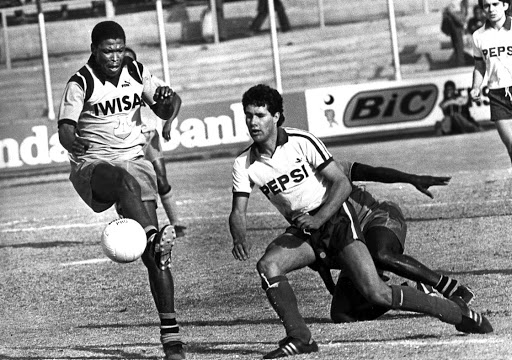 To celebrate the day the club was formed 50 years ago, Kaizer Chiefs made a return to their spiritual home yesterday where stars from yesteryear returned to Phefeni to commemorate the incredible milestone.

It was on January 7 1970 that the legendary Kaizer Motaung established the club at his family home in Sentsho Street.

Opposite lies the football ground where the first training session was held all those years ago.

"It's unbelievable how far the club has come and it all started here," club legend Jackie Masike said.

"This club is a wonderful institution and I am happy to have been there from the start." Masike and Banks Setlhodi were the two former players in attendance who were there when the club was founded. Other doyens who graced the occasion were Ryder Mofokeng, Vusi "Computer" Lamola, Fetsi Molatedi, Lucky Stylianou, Ace Khuse and Doctor Khumalo, to name but a few.

Among those waiting on Tuesday morning for Kaizer Chiefs' 50th birthday celebrations in Phefeni to begin was 70-year-old Sheila Mosimane-Makhele‚ the ...
Sport
2 years ago

Mofokeng admits that no one could foresee that Chiefs would be such a great success.

"To be honest, none of us thought that the club would get here. When I joined all I wanted was to be close to bra Kaizer and to learn from him," Mofokeng said.

"When bra Kaizer came back from America I was approached to join the club and I didn't think twice about it. Seeing where the club is today it means I didn't make such a bad decision."

Another legend Stylianou, who was the first white player to play for the club, recalled how the apartheid police harassed him for joining the club.

"White people were not allowed in black areas after sunset. There were always police around. I got arrested a couple of times and would be released a few days later," he said.

Lucky Stylianou: 'There was not one stitch of racism throughout my time at Kaizer Chiefs'

Lucky Stylianou remembers how‚ as the first white player to join Kaizer Chiefs in 1978‚ he was made to feel welcome at the then eight-year-old ...
Sport
2 years ago

"They would follow me and harass me and they hoped to get me to be an informant. I told them that it was never going to happen."

As they look forward to the next 50 years, the club is aware that much work needs to be done to maintain its prestige. The club has not won a trophy since 2015, which is its longest spell without silverware.

Marketing director Jessica Motaung said it was key that the club got back to winning ways on the pitch.

"At the end of the day, winning on the field is very important for us. We need to get back to our tradition of winning trophies and playing excellent football," she said.

"We are hoping that the 50th anniversary will inspire the players to silverware this season."

It is a week of mixed feelings for our country, especially its black majority.
Opinion
2 years ago