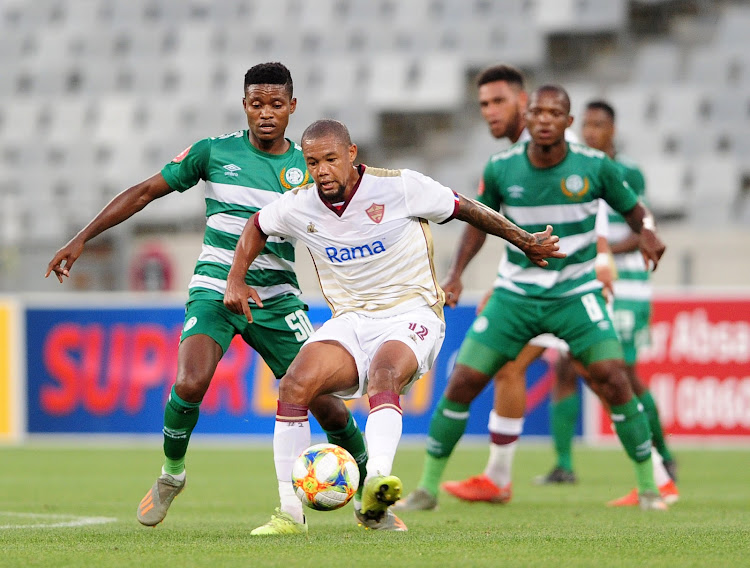 A double change at half-time turned the tide for Bloemfontein Celtic, who came from a goal down to win 2-1 away over Stellenbosch FC and move into the top eight on the Absa Premiership table.

Skipper Ndumiso Mabena delivered the 81st minute winner with a shot worthy of the three points after Mzwanele Mahashe had got them back into the contest in the 54th minute.

It was as much as the Free Staters deserved with a dominant performance that marked only their second away triumph of the league season.

Ryan Moon had given the hosts the perfect start as he rose majestically to head home Marc van Heerden’s third minute cross.

The game could not have started better for the home team as Van Heerden whipped in an inch-perfect ball from the left that moon rose unchallenged to head home with some force.

It got the small crowd on their feet almost immediately to enlivened what might have otherwise been a pretty soulless night, with the tiny 250-strong crowd rattling round the giant stadium.

Stellenbosch had some slick touches after that, with their tails up in the air, as new signing Granwald Scott began to put his stamp on their midfield.

But midway through the half they looked to lose the initiative as Celtic then produced some pacey play but without any final product.

There were dangerous moments of hesitation in the home defence and some panicked clearing.

But as the half came to a close, so Stellenbosch threatened again with Scott keeping Jackson Mabokgwane on his toes and then Nyiko Mobbie’s thunderbolt being tipped over the bar by the Celtic ‘keeper.

Given Mashikinya came on to strengthen the visiting middle at the break and Andile Fikizolo to add to the flair and it did not take long for the equaliser to come.

Celtic skipper Ndumiso Mabena first squandered a good freekick chance but then Celtic were level nine minutes into the second half as Mahashe got in at the back post to head home amid some disorganised home defending.

Boy de Jong was forced to make a reflex saved to keep out Victor Letsoalo’s powerful effort and Mabena came close with a back post slide with just over 20 minutes left.By this stage, Stellenbosch were looking like rookies as they were being overrun and only holding on grimly.

As the game headed to the final 10 minutes, De Jong made another key save to deny Mabena, whose second free kick effort was a lot more accurate than his first.

But he could not stop a scorcher from outside the area by the 32-year-old, very much still leading from the front.

Mabena should have wrapped it up soon after as Menzi Masuku set him up for an easy finish but de Jong made another outstanding stop.Stellenbosch stay second from bottom, still with only one home win this season.