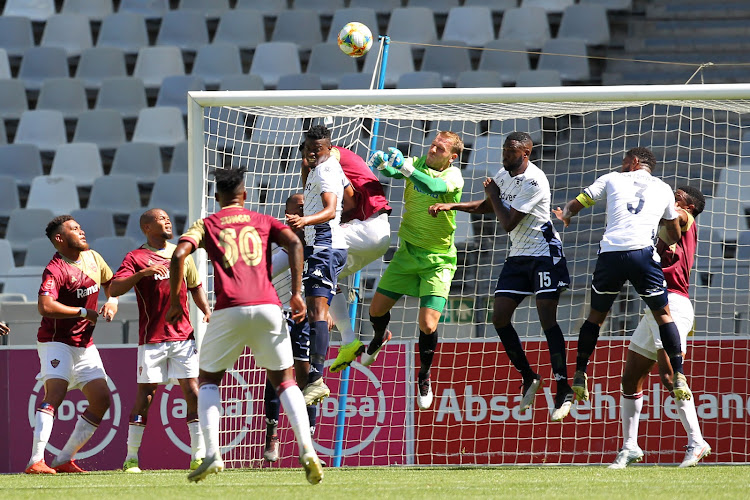 Wits have won five of six away games, and conceded just a single goal on the road, and this three point haul means they keep up the pressure on the frontrunners, given all the games they still have in hand.

Motupa’s fourth goal of the league campaign was a swivel of the boot and a ‘no-look’ shot from an acute angle that was hit with such power that Stellenbosch goalkeeper Boy de Jong could only watch it whistle past him.

Motupa had been set up from right-hand side by Sameehg Doitie as the game suddenly came alive after a slow start.

Hotto’s shot deflectedly wickedly off Morgan Gould to see Wits double their lead on the counter attack as Stellenbosch looked much improved after the break.

The Christmas cobwebs ensured the first half hour was full of application but little polish and both goalkeeper were under-employed.

But then Stellenbosch’s new signing Granwald Scott, who Wits released just days ago, hammered a snap effort just wide of ex-employers’ goal to inject some life into the contest.

But Stellenbosch might have got a quick equaliser when Ryan Moon cleverly flicked on for Waseem Isaacs, who went narrowly wide with a stretched effort.

Motupa should have added a second, and made it 2-0, when he had a 51st minute counter attack chance but under pressure from Robyn Johannes scuffed his shot wide.

But the second did come from Hotto to emphasise the quality of the away outfit, whose coach Gavin Hunt seemed pleased but said it was tough to play in a near empty stadium and under a strong sun.

“The points are the most important thing. It was a difficult side to play against but it was good for us to come away and win,” Hunt said.