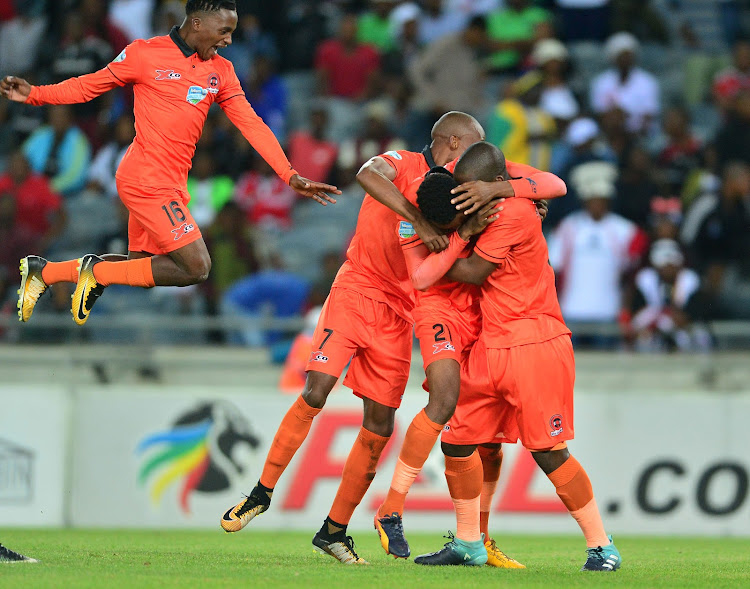 Last season saw an almighty scrap at the bottom of the Absa Premiership with no fewer than five sides embroiled in a relegation battle on a tense final day of the campaign, and the signs are that we may have a repeat again come May.

Free State Stars were the unlucky losers at the end of the 2018-19 campaign as a final-day defeat to Mamelodi Sundowns both secured the championship for the latter, and sent them into the GladAfrica Championship.

Maritzburg United secured a point at Baroka FC to earn a playoff place and breezed through the post-season competition to retain their top-flight status.

Such has been United’s improvement this season under Eric Tinkler, they are unlikely to be involved again, but you get the feeling that any team currently in the bottom half could be in for some last-day drama.

Just four points separate bottom side Polokwane City and Bloemfontein Celtic in ninth, and all the bottom eight have shown the kind of inconsistency that will see them struggle to climb the table quickly.

That is, perhaps, bar Cape Town City, who are currently second-bottom with a paltry 13 points from 15 matches, but have some positives to look forward to in the new year.

They have looked defensively more solid under new coach Jan Olde Riekerink, and the return of goalkeeper Peter Leeuwenburgh from injury is also a boost.

Their recent struggles have been up-front, but they should have star striker Kermit Erasmus back fit in the New Year, while the return to availability of Mpho Makola after his ban was reduced will be a big plus in how they turn defence into attack.

The club have also signed Mduduzi Mdantsane, who should bring goals from midfield, and the return to fitness of Dutch playmaker Chris David is another bonus.

They are the one team in the bottom four who could get a long run of wins together and escape quickly from the relegation mire.

Bottom side Polokwane City have lost their last 10 matches in a row, a club record, and look a side shot of confidence.

They have recently appointed Clinton Larsen as coach and while he will have them better organised, the problems in the squad run deep.

January will be crucial for them – they start against Chippa United on January 4 and then face Orlando Pirates, before meetings with fellow strugglers Baroka and Stellenbosch, either side of a visit by Lamontville Golden Arrows.

Baroka FC recently lost coach Wedson Nyirenda, who resigned after the home defeat to Stellenbosch, which meant they have still yet to pick up a win in Polokwane.

In fact, Baroka have claimed only seven victories in their 53 home Absa Premiership games since their promotion to the top-flight and that is the single reason why they are involved in the relegation scrap each year.

Their away form has always been decent, but an inability to pick up home points means they are always thrust down the table.

Stellenbosch FC have managed a credible 15 points from 15 games and are probably exactly halfway to safety, but have a major advantage over their rivals.

The problems with venues for the Winelands club means that 10 of their 15 games to date have been played away, which means they have the vast majority of their remaining games at home.

They will therefore be confident they can pick up enough points to survive, with no team in the PSL relishing a trip to Cape Town as first the wind, and later in the season the rain, make life uncomfortable.

AmaZulu are a point better off and have looked more assured under coach Jozef Vukušič, but are also a team where the wheels can come off quite quickly.

Just nine goals scored in 15 games to date shows where their problems lie – along with Baroka it is statistically the worst attack in the league.

Black Leopards have just lost their second coach of the campaign after Luc Eymael resigned, though results during his tenure were not too bad.

How that will unsettle an experienced squad remains to be seen and, of course, they will always be difficult to beat in Thohoyandou, which is their major trump card.

Chippa United have been excellent in recent times under Zimbabwe coach Norman Mapeza, taking 13 points from the last 15 available to move off the bottom of the table after a disastrous start.

Whether Mapeza can keep that momentum going remains to be seen as the team face two tough away games in Limpopo against Polokwane and Leopards to kick off the New Year. As rapid as their rise has been, so too could be their fall.

Celtic have 17 points from 14 games and some excellent victories this season that suggest they will not fall into the relegation trap, but two defeats at the end of the year to Kaizer Chiefs (5-3) and AmaZulu (2-1) showed their frailties.