Sundowns struggling to find fifth gear in 2019-20, but watch out if they do 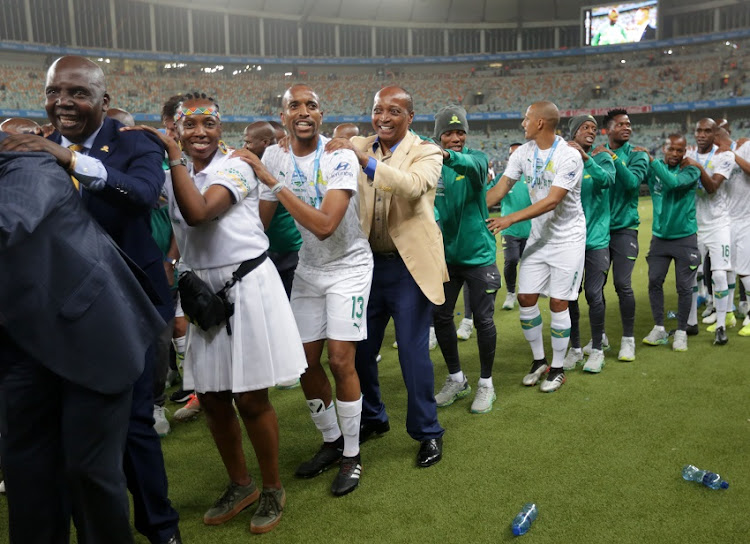 Mamelodi Sundowns have, by their own lofty standards, stumbled through the first half of the Absa Premiership campaign, but do have a trophy to show for their efforts this season after they lifted the Telkom Knockout cup earlier this month.

It was a rare success for Sundowns in a competition where they have inexplicably battled, but their four titles in the TKO is the second-most of any club behind Kaizer Chiefs.

They defeated Maritzburg United in the final, albeit in somewhat controversial circumstances, and lifted a first domestic cup trophy since they claimed the same competition in 2015.

Given their continental and league success in-between those victories it has been a surprisingly barren run of domestic knockout trophies.

The Telkom win made up for a semifinal loss in the MTN8 where Pretoria rivals SuperSport United got the better of them with a 3-1 aggregate success.

Sundowns also marched confidently into the group stages of the 2019-20 Cadf Champions League, including a record 11-1 victory over Seychelles side Cote d’Or that is the biggest in the competition’s history.

Frighteningly, they could have had four or five more on the night bar some poor finishing.

The 16-1 aggregate success was also the largest in the Champions League as Sundowns made a statement of intent as they seek to add to their 2016 triumph in Africa’s elite competition.

That statement has continued in earnest in the round-robin stage, where Downs’ 1-0 away win against USM Alger on Saturday night leaves them top of Group C, and overwhelming favourites to progress to the quarterfinals.

It is tough to argue with a Premiership haul of 28 points from 14 games that leaves Sundowns seven points behind leaders Kaizer Chiefs at close to the midway point of the campaign, but it is fair to say they have yet to truly convince in the league.

Six of their eight wins have come by single-goal margins, while they have scored more than two goals in a game only once this season when they beat Stellenbosch FC 3-1 at home.

Downs were also held to draws by struggling Chippa United (1-1) and Baroka FC (0-0), and let a lead slip as they lost 3-2 to Lamontville Golden Arrows in the rain in Durban.

The defence has looked more vulnerable than in recent years, with only five clean sheets, and their record of 12 goals conceded is only the fifth-best in the league.

Individually, the plus points have been a return to form for midfielder Andile Jali and the emergence of Uruguayan centre-forward Mauricio Affonso as a ‘different’ option with his height and slick feet.

But it is also telling that Themba Zwane (four goals) is the leading scorer for the side in the league so far this season, with Gaston Sirino and Sibusiso Vilakazi the next highest with two each.

They have no single dominant goalscorer and that has perhaps limited Sundowns’ quality in the final third – five teams, including Bloemfontein Celtic (20) have scored more than their 19 goals, while leaders Chiefs have added 10 more than that.

Their numbers on both attack and defence are not bad, but this is not the Sundowns who have dominated the local game for most of the last five years either.

Having said that, they are very much in the title race still and tend to finish the season stronger than they start, so only a fool would write them off at this stage.

A third successive league triumph is still in their grasp, with coach Pitso Mosimane hinting at some January arrivals to bolster their attack. Sundowns, when they click, can be unstoppable. Chiefs and the other title chasers will be wary of that entirely realistic possibility.