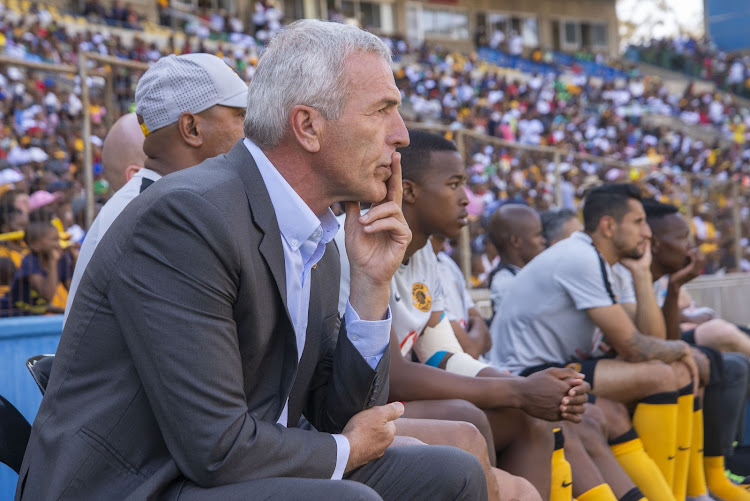 Ernst Middendorp and his bench watch from the sidelines during the Macufe Cup match against Bloemfontein Celtic.
Image: Frikkie Kapp/BackpagePix

Kaizer Chiefs may appear to have a commanding lead at the top of the Absa Premiership table as we close in on the halfway mark of the campaign‚ but they will be wary of a Mamelodi Sundowns team that traditionally finishes the season strongly.

Realistically‚ you would think‚ there are three teams remaining in the title race‚ with Chiefs the favourites given their stunning points haul of 35 from 14 games played.

Sundowns are in second place with 28 points from 14 matches‚ while it is hard to see third-place SuperSport United (24 from 15 games) finding the consistency in the second half of the campaign to mount a serious challenge.

That leaves BidVest Wits (23 from 11 games) as the other potential winner‚ and if they claim victory in their three games in hand they would be within just three points of the AmaKhosi.

But Wits coach Gavin Hunt will be the first to tell you that points on the board are vastly superior to games in hand‚ and with only two wins in their last five Absa Premiership encounters‚ The Clever Boys perhaps do not have the squad to mount a 30-game challenge.

Orlando Pirates (20 from 15 games) are surely too far back to reel in Chiefs and would need a spectacular collapse from the latter which would only open the door wider for Sundowns in any event.

So it is likely we have a two-horse race on our hands between Chiefs and Sundowns‚ with the latter having already claimed a trophy this season in the Telkom Knockout.

A big factor counting against The Brazilians is the fact that they remain a contender in the CAF Champions League and that will bring a distraction and fatigue in the second half of the season.

January could well be the pivotal month in the title race‚ giving Chiefs either the chance to pull away and build an unassailable lead‚ or provide the chasing pack with the opportunity to close in and possibly even overhaul them.

Ernst Middendorp’s side will play five matches in 21 days‚ including against SuperSport (away) at the start of the month.

Their scheduled fixtures against Wits and Sundowns in this period have been moved due to the CAF club competition commitments for their opponents‚ saving them perhaps an even more taxing schedule.

Three of the five matches in the month are away‚ with trips to SuperSport‚ Black Leopards and Lamontville Golden Arrows. None are easy‚ though Chiefs have won six of their seven away games this season.

The rescheduling of matches means Chiefs must face Wits twice still this season‚ a major opportunity for the Clever Boys to close some ground‚ while they also have a Soweto Derby against Pirates and‚ of course‚ a game against Sundowns.

Their final three matches of the campaign are away at Wits‚ home to Chippa United and then an away trip to Baroka FC‚ who cannot buy a home victory it seems.

Sundowns have an even tougher January with games against AmaZulu (away)‚ Wits (home)‚ Pirates and SuperSport (both away) together with them crisscrossing the continent in Champions League action.

It is an unforgiving schedule and if coach Pitso Mosimane can come out of this month with his league fortunes still intact‚ he will feel they have a real shot at claiming the title.

They also must still play Pirates twice this season‚ while their final three games of the campaign are all against Limpopo opposition in the form of Baroka FC (home)‚ Polokwane City (away) and Black Leopards (home).

Wits also end their season with back-to-back matches against Limpopo teams‚ who could have a major say in the title race as they likely also fight relegation‚ finishing away at Leopards and home to Polokwane City.

Wits have also been better away this season than at home‚ so perhaps the fact that 10 of their 19 remaining matches are on the road is a blessing.

More often than not in recent seasons‚ Sundowns pick up more points in the second half of the campaign than the first and they will have to again if they are to mount a challenge to Chiefs’ title charge.

They will also point to the 2013/14 campaign when Chiefs at one stage held an 11-point advantage over the Brazilians and ended up losing to Sundowns by two points at the end of the campaign.

That would suggest this title race is far from done.