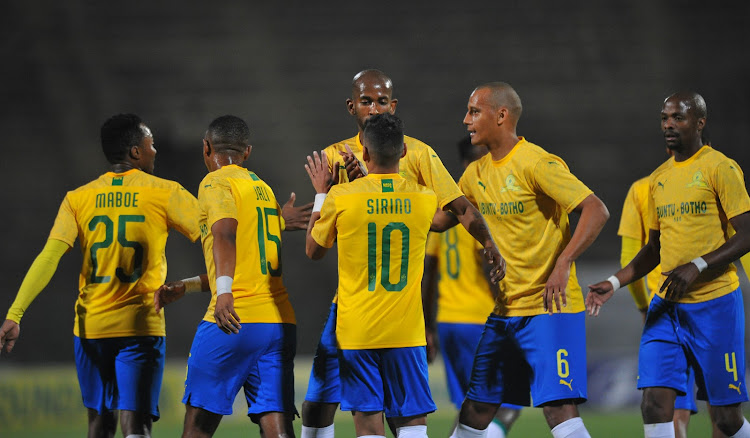 Hlompho Kekana accepted a late Christmas gift from USM Alger as Mamelodi Sundowns secured a precious 1-0 away victory in their CAF Champions League Group C clash at the Mustapha Tchaker Stadium in Blida on Saturday.

The victory moves Sundowns to seven points from a possible nine in their pool and to within touching distance of a quarterfinal place with two of their three remaining games at home and a winnable trip to Angola to face Petro Atletico to come.

Their latest win came in a game of few chances, with Sundowns barely seeing a sight of goal, but coach Pitso Mosimane’s side worked incredibly hard to neutralise their hosts and take the one opportunity that did come their way via a misplaced back-pass.

It was a superb away performance against a strong North African opponent and further evidence that The Brazilians have learnt how to pick up points on the road – and provide some consolation to the players who had each other’s’ company this Christmas, rather than their families.

The defeat was a first at home for USM in the Champions League since 2015, and just a second in 14 years and 23 matches.

Mosimane employed an all-Uruguayan front-line with strikers Mauricio Affonso and Gaston Sirino, while the midfield was anchored by experienced duo Kekana and Andile Jali.

Sundowns were ponderous in defence at the start of the game and were almost made to pay as Billel Benhammouda won the ball on the edge of the box and forced goalkeeper Denis Onyango into a good low save.

There was another scare for the visitors shortly afterwards when Zakaria Benchaâ got a sight of goal but Onyango again produced a decent save.

Benchaâ then missed an even better opportunity when he had the whole goal to aim at, but put his effort just wide of the post.

Sirino almost raced onto a pass over the top of the USM defence, but was beaten to the ball by the home goalkeeper Mohamed Zemmamouche as Sundowns battled to create openings.

Abdelkrim Zouari then tested Onyango at his back post and Benchaâ missed an excellent chance as USM continued to look the most likely to score in the first half.

Opportunities were few and far between for Sundowns, but they took the lead on 59 minutes when Kekana latched onto a poor back-pass from Mustapha Kheiraoui and rounded Zemmamouche to score into an empty net.

It was a terrible moment for the USM defence, but credit should go to Sundowns for the way they pressed and harassed the home side into errors.

Onyango did well to beat away a low shot from Benhammouda and got lucky as his weak punch presented a chance for Hamza Koudri to score, but the latter flashed his shot wide of goal.

Sundowns are next in action at home to USM on January 11, but before than have Absa Premiership clashes away at AmaZulu (January 4) and home to Bidvest Wits (January 7).

Evans Rusike is likely to return to full training when SuperSport United get back from their Christmas holidays on Saturday‚ putting him in line to ...
Sport
2 years ago

Bidvest Wits will be unable to field their new striker Bienvenu Eva Nga when they meet Al Nasr of Libya in the Caf Confederation Cup on Sunday ...
Sport
2 years ago