Bernard not ready to park off yet 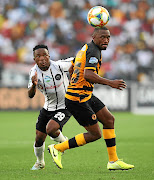 Bernard Parker of Kaizer Chiefs is challenged by Paseka Mako of Orlando Pirates in the Telkom Knockout semifinal. Parker says his table-topping, high-flying club must keep calm until the end of the season. Picture: Samuel Shivambu/BackpagePix

Bernard Parker has news for his gold-and-black-clad detractors who think that at 33 he is over the hill: he wants to play for five more years.

And there's more: the workaholic Parker hopes to once more don the Bafana Bafana shirt. In a wide-ranging interview with the Sunday Times, the Kaizer Chiefs utility player, who has won two league and two cup titles with Amakhosi since joining them in 2011, declared himself fit as a fiddle.

"I think there's still five years in me," said the 33-year-old Boksburg-born player when asked about his plans after a decorated football career.

"I'm in top shape and in good condition. I look after myself very well and you can see from the amount of kilometres I run in each and every game.

"Every time I've been asked this season to play a particular role I perform that role the best that I can, whether it's in the defence or midfield.

"I'm not worried about any critics or whatever people say. I'm in the best mental state ever and I'm enjoying my game."

Parker, who has 72 caps for his country and is the third-top all-time scorer behind Benni McCarthy and Shaun Bartlett with 23 strikes, still harbours ambitions for a Bafana return. He last played for Bafana when they exited the Africa Cup of Nations in the first round after a 2-1 loss to Ghana in January 2015.

"With my experience I'm there to help Bafana get to the top 10 in Africa where we belong. If I get that opportunity I will gladly jump for it," said Parker of Bafana.

Parker recently graduated with a qualification in sports management. He hastens to say that was not because he is about to close the chapter on a career which gained real traction in early 2002.

"I just decided, why not empower myself in what I know, which is football.

"At the end of my career I will definitely have a much sharper and broader mind in terms of football. I definitely want to help in football, help the youngsters to become top professionals.

"But I haven't decided yet on what I want to do. I just thought while I'm still playing why don't I empower myself."

One of the few SA players who can be described as an ultimate professional, Parker said it was important for him to be leading in planning for the future while he was still playing.

"Some of us only matriculated and went on to play football and get to be professional at an early age," said Parker, who also won the league title with FC Twente in the Netherlands before joining Chiefs.

"I've seen a lot of players and it's not nice when you get to face that side of life after football. I never even get tired of myself telling the youngsters that we have to break that curse. I hope if we lead by example others will follow."

As one of the senior players at Chiefs who have seen the club at its lowest ebb in the past four barren seasons, Parker said the recovery under Ernst Middendorp this season has been remarkable and could not have been more timely.

"We're definitely a performing team and it's just now for us to excel and I'm sure that we're capable of doing that," said Parker of his table-topping team that is on an eight-match winning streak going into their away Absa Premiership clash against Maritzburg United at Harry Gwala Stadium today.

"We want to be back to our golden days as Chiefs. So far so good. It's now in our hands and I do believe that we do have the muscle to maintain it. For me as a player it's definitely a great experience, experiencing the ups and downs.

"It's also good for us to celebrate our 50 years next year as a club with a trophy.

"The pressure is there but it's for us to keep calm until the end.

"Our main goal is to look at May while we take care of today."

One of the players with a big hand in keeping Chiefs at the top is the new striker Samir Nurkovic, who has became an instant sensation by scoring eight goals in the league and one in the Telkom Knockout.

"When he first arrived he was surprised that I spoke Serbian to him and that I had a short spell in Serbia (playing for Red Star Belgrade in 2009). We connected immediately. I gave him a few tips of what to expect in this league and he has responded very well.

"He's an emotional person and doesn't like to be kicked by the defenders. But I told him to be aggressive and that's what Chiefs have been missing. He's the piece that completes the puzzle. He's a good guy, humble and hard working. This is the type of player that fits the Chiefs profile. I'm just happy for him and wish him many more goals."

After the Maritzburg game Parker and his teammates will relish a few days off with family. "I've done my Christmas things in November. Anywhere in the world I will spend it with my family."