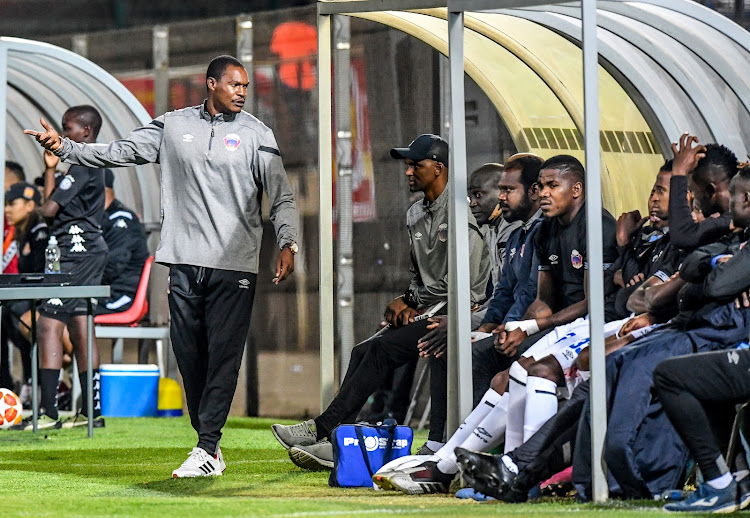 Zimbabwean boss Norman Mapeza has instilled a culture of defensive discipline in the three months that he has been in charge.
Image: Sydney Seshibedi/Gallo Images

Coach Norman Mapeza has laid the emphasis on defensive discipline and communication since his arrival at Chippa United and has reaped the rewards as his club ended the year in 10th place.

Just a fortnight earlier they had been bottom of the Absa Premiership but the Zimbabwean has proven a magician in turning things around for the Port Elizabeth-based club since his arrival in early October.

“The defensive performance over the last five games has been fantastic‚” said Mapeza as he looked back on his first three months in charge.

“Communication starts with the goalkeeper‚ it goes to the fullbacks and the centre backs.

“If they communicate well‚ those guys‚ and maintain the distance between themselves and between the midfielders‚ we are then solid in terms of our defending.”

Mapeza said his priority when he first arrived at the club was to shore up the defence.

“If you are building a house‚ you must start with the foundation.

“I said‚ look let’s sort out the back first. That was where my main worry was.

“What I’ve picked up here is that it’s not easy to get points. So‚ if you can go out and get a draw‚ it’s a golden point.

"If you get organsised at the back then upfront will sort itself out.”

But it is not yet a completed job‚ he added.

“There are so many things that still need to be fixed.

“For now‚ I’m happy the guys have been working so hard. We are defending as a group‚ it’s not just the goalkeeper and the back four but a collective effort.

“You can see the wide players are dropping back to defend‚ the midfielders drop back.

“It’s still a work in progress; sometimes they get lost‚ but so far‚ so good.”

Chippa have won four of their last five games after being the last of the 16 top flight teams to register a win this season.

“Now it’s all about planning for the next game. We don’t have time to celebrate‚” said Mapeza.

Coach Wedson Nyirenda has confirmed that he has resigned from Baroka FC‚ but says he is not yet ready to give a “comprehensive statement” on why he ...
Sport
2 years ago