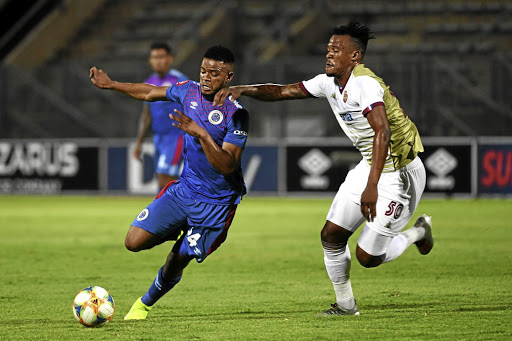 Mduduzi Mdantsane of Baroka is rumoured to be leaving the team in the January transfer window.
Image: ANTONIO MUCHAVE

Baroka coach Wedson Nyirenda has emphasised there's nothing sinister about the stripping of Mduduzi Mdantsane the Bakgaga captaincy in favour of Gerald Phiri Jr.

Mdantsane, 25, had inherited the Baroka armband from Letladi Madubanya at the start of last season. The midfielder etched his name into Bakgaga folklore when he skippered the side to their first-ever silverware when they won the Telkom Knockout last year.

"There's nothing wrong about changing the captain . it's the club's policy to change captains," Nyirenda told Sowetan. Mdantsane bequeathed the captaincy to Phiri Jr last month.

The Malawian left-winger joined Baroka at the start of the season from Bidvest Wits, where he spent the better part of his stint on loan at the now defunct Platinum Stars and Ajax Cape Town respectively.

While dismissing that his decision to relieve Mdantsane of the responsibility to lead the team was triggered by rumours he's leaving in January, Nyirenda couldn't stop raving about his ex-skipper's probity.

"I don't speak about speculations, so my decision of making Phiri the new captain has nothing to do with that.

"He did very well when he was our captain, even when the announcement that we are removing him as the skipper was made, he took it like a man . he never sulked. He's still the first person to arrive at training and the last to go home."

Some PSL players who've been stripped of captaincy in recent years:

Mamelodi Sundowns and Golden Arrows will give fans a preview of what to expect when they clash in two weeks' time for a place in the final of the ...
Sport
2 years ago

Mamelodi Sundowns lost ground on runaway log leaders Kaizer Chiefs when they were held to a 0-0 draw by Baroka FC at the New Peter Mokaba Stadium in ...
Sport
2 years ago

Baroka to fight for their coach

Mdantsane expects Downs to attack them.
Sport
2 years ago
Next Article