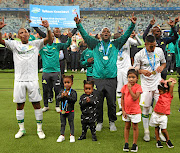 Most people perhaps don't remember, but there was a time not so long ago that Mamelodi Sundowns went for six years without a trophy.

Before Sundowns ended their drought by winning the league in May 2014, the last time they won silverware was in 2008 with the Nedbank Cup.

That time was before the arrival of Pitso Mosimane. The former Bafana Bafana mentor arrived in December 2012 to rescue a sinking ship that was in the relegation zone.

Fast forward seven years later, Mosimane has delivered nine titles with the most recent coming in their Telkom Knockout final triumph over Maritzburg United. During his reign, the Kagiso-born coach has achieved total domination not only of SA football but of the continental game as Downs captured the CAF Champions League in 2016.

He often doesn't express his personal wishes, but after the win on Saturday Mosimane revealed something close to his heart.

"That's my other passion that Sundowns have to respect also. My legacy is not about trophies, I need to build my own legacy so that my children can say our father has left a legacy. We need five players in Serie A, and five in La Liga and five in the English Premiership."

Interestingly, Mosimane is yet to commit to a contract extension with Sundowns with his current deal expiring at the end of the season.

The 55-year-old admits that his wish is to remain but implied that he must be paid what he is worth. "I have said it before that I want to stay ...I have been here for seven years and I've had two contracts and there has never been an issue. I don't think you've heard about me before stalling a contract. I'm 55 and I want to go at 60, this is too stressful. It will be my last contract and it must be worth it."