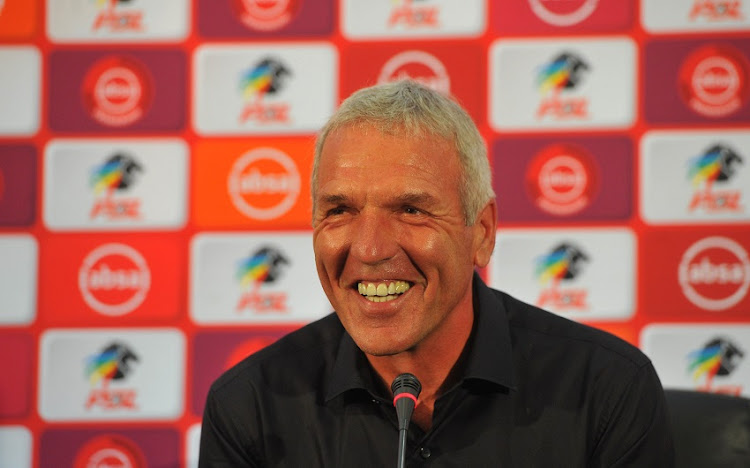 Kaizer Chiefs coach Ernst Middendorp has revealed that he does not know much about his fellow German and new Orlando Pirates counterpart Josef Zinnbauer‚ but said he should be given a chance to prove himself.

The 49-year-old and largely unknown Zinnbauer was announced as Pirates’ new head coach last week to replace Milutin “Micho” Sredojević‚ with caretaker Rulani Mokwena moving back to the role of assistant.

“I know him by name and you must understand that he is nearly 20 years younger than me‚” said Middendorp after he was announced as the Absa Premiership coach of the month for November at the PSL’s offices on Tuesday afternoon.

Exciting SuperSport United midfielder Sipho Mbule was named as the player of the month‚ as Middendorp became the first coach to receive the monthly coaching award three times in succession.

Middendorp continued: “This means he came into another era because I left Germany years ago.

“Of course it’s not that you are not capable or able to understand a certain person. But again‚ give him a clear chance and clear opportunity to manage the team.

“I have no obligation to wish him the best‚ assess or make comments about him.”

The arrival of Zinnbauer almost certainly ensures that there will Germans on both benches for the second round of the Soweto derby on February 29 next year at FNB Stadium‚ where Pirates will be hosting Chiefs.

“It’s nice to have two Germans coaching the Soweto derby‚ we are global players as coaches‚” Middendorp said.

“It doesn’t matter if it is South African coach‚ you are coming from Zambia or from Zimbabwe – because we are [all] global players.”

Middendorp said that one day a South African will be in charge of a team in a major foreign footballing country.

“It will happen shortly. I am 100 percent convinced that a coach from SA will coach other in countries worldwide‚” Chiefs’ coach said.

“It is a normal procedure and there is nothing stopping qualified coaches from SA going to other continents and being part of the technical team.

“I see a lot of coaches coming in‚ not only in the goalkeeping‚ analysis or being assistant-coach‚ and they are capable. I don’t really want to jump into the discussion of saying this coach is from this or that country in terms of comparing them.”

Middendorp said that Zinnbauer has not reached out to him for information on South African football‚ and that he is focusing on Amakhosi’s next league match against Maritzburg United at the Harry Gwala Stadium on Sunday.

“You are coming with a specific question but I am not giving comments in that direction. I have not been approached and it is fine‚” Middendorp said.

“I am now 26 years on the professional market as a soccer coach. When you start coaching as a professional you have ideas and you must be able to say‚ ‘Let’s talk what is modern’.

“There was a big coach who said that modern is when you pick up points and when you are successful. I have an additional idea about it that you have to have the understanding that coaching five years ago and coaching today is a total ball game.”