Zambia too good for Amajita in Cosafa U-20 final 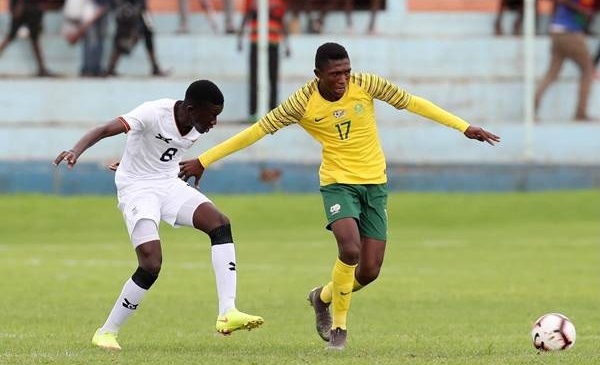 South Africa Under-20 midfielder Keletso Sifama (right) in action in the Cosafa U-20 Men's Championship final against Zambia at Nkoloma Stadium in Lusaka on Saturday.
Image: Muzi Ntombela/Backpagepix

Striker Jonathan Munalula scored twice as hosts Zambia claimed a deserved 3-0 victory over South Africa to claim the 2019 Cosafa Men’s Under-20 Championship in front of a capacity crowd at the Nkoloma Stadium on Saturday.

Francisco Mwepu netted a third in a dominant performance from the home side, who ended South Africa’s run of success in the regional showpiece tournament that had seen them champions in the previous two years.

Despite the result, coach Helman Mkhalele should be congratulated after his totally revamped squad only assembled a week before the competition, with the side having lost the likes of Lyle Foster, Njabulo Blom, Tashreeq Matthews and James Monyane.

South Africa Under-20 coach Helman Mkhalele is expecting an epic contest in the Cosafa Men’s U-20 Championship final against hosts Zambia at what is ...
Sport
2 years ago

After Human had a weak shot saved by the Zambian keeper, Molefe made a superb stop to keep out a header from Crawford Mwaba.

That near miss seemed to spur the home side on and suddenly they were piling on the pressure and camped in the South African half.

They somehow failed to score on 31 minutes when Molefe again came to SA's rescue as Munalula’s header came off the underside of the crossbar.

The officials ruled that the ball did not cross the line and in the ensuing scramble, Molefe twice kept the home side at bay with point-blank saves.

But the dam wall finally broke on 40 minutes with a superb goal as Munalula’s brilliant overhead kick from the edge of the box looped over a stranded Molefe.

Appollis showed good trickery in the box to create a shooting chance from a tight angle, but it was brilliantly beaten away by Zambia goalkeeper Prince Bwalya.

It was 2-0 just before the break as Zambia hit South Africa on the counterattack, Mwepu getting behind the defence and placing the ball past Molefe.

South Africa created a number of half-chances in the second period, but the final nail in the coffin came with six minutes remaining when Munalula added his second.

Angola claimed the bronze medal with a comprehensive 5-1 victory over Madagascar in the third-place play-off.

Amajita coach Helman Mkhalele is fretting about the unavailability of influential attacking midfielder Oswin Appolis, 18, for today's Under-20 Cosafa ...
Sport
2 years ago
Next Article