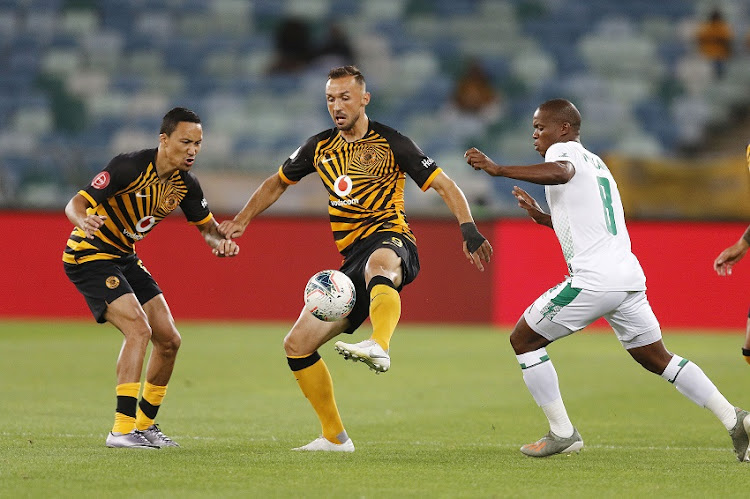 A hat-trick from Samir Nurkovic and brace from Leonardo Castro earned Kaizer Chiefs a 5-3 victory in an Absa Premiership eight-goal thriller at Moses Mabhida Stadium on Saturday night, the spectacular nature of which only enhanced Amakhosi’s growing title credentials.

A frantic first-half saw Celtic take the lead three times, first via Ndumiso Mabena in the 13th minute. Nurkovic equalised in the 21st. Harris Tchilimbou scored for the Free Staters in the 24th. Nurkovic levelled in the 31st. Siphelele Luthuli made it 3-2 in the 35th.

Chiefs owned the second half as Castro levelled for a third time in the 47th, then Nurkovic gave Amakhosi their first lead in the 61st. Castro headed a fourth goal out of five from set pieces for Chiefs, making it 5-3, in the 71st.

Some have complained that this Chiefs – confidence soaring as they approach an imposing 10-point lead by Christmas – are not pretty. It’s not an unfair criticism.

But they cannot be accused of not being exciting. On Saturday night, even as an unusually disorganised defence bled goals in the first half, Amakhosi coach Ernst Middendorp never relented on whipping his team forward on attack.

Celtic coach Lehlohonolo Seema had a clever plan on the night, troubling Chiefs with pace on the counterrattack. Amakhosi never capitulated to the temptation to tighten, or play for a draw – though they did resolve some shape issues at the break.

If a shaky first half raised some questions on Chiefs’ title credentials, their bravery to press relentlessly forward and a magnificent second half ultimately earned a dramatic victory that kept the dream alive.

A 3-5-2 formation has its place. But with Bernard Parker, all of 33 years old, employed at left wingback to stomp the flank a-la Roberto Carlos? That does seem stretch.

Chiefs' backline were at times shockingly out of shape conceding three first-half goals. Amakhosi's attack, packed with players - and one Nurkovic - capable of scoring goals, notched two in the other direction.

Celtic's answer to the Serb was skilful playmaker Mabena.

They took the lead when Lantshene Phalane’s low-trajectory pass from deep was missed in the middle by Tebogo Potsane. Parker allowed Mabena space behind him, then allowed the forward to cut inside and finish past goalkeeper Daniel Akpeyi.

Lebogang Manyama’s free-kick from the left was struck low to Nurkovic, who bounce the ball up, turned and volleyed past Mondli Mpoto.

Manyama’s corner was not cleared by Celtic, Daniel Cardoso looping a chip back into the danger area where Nurkovic headed in.

Middendorp introduced Dumisani Zuma for Parker from the break. Within moments Chiefs earned a corner. Manyama’s delivery found Castro unmarked, and the Colombian was not about to miss a free header.

From the break, it was a different Amakhosi – one charged to ram home the advantage after scoring. They added another, Castro’s cross finding Nurkovic to smash a volley.

From a Manyama corner, Castro again was left free to head Chief’s third of the half past Mpoto.