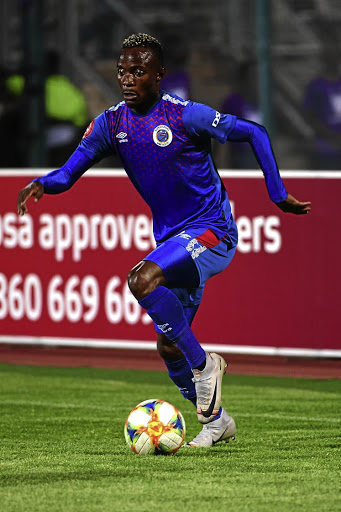 SuperSport United winger Kudakwashe Mahachi has reflected on his rather distressing stint at Orlando Pirates, feeling he's now adapted to life at Matsatsantsa.

Perhaps an indication that he's settled in at the Tshwane club, barely four months after his arrival, is the fact that Mahachi has already amassed 16 appearances, netting twice in all competitions.

"Last season was difficult for me because I was not getting enough game time. But I came here [to SuperSport] and things are looking better. I think I've adapted well," said Mahachi.

"I am starting to play every week... that pleases me because a player is employed to play, not to sit and watch football."

Mahachi arrived in SA to join Mamelodi Sundowns from his native Zimbabwean club the Highlanders in 2014. At the Brazilians, the 26-year-old left-winger only played 13 matches.

Despite having been in the country for five years, Mahachi only won his first trophy in SA in October when Matsatsantsa outshone Highlands Park in the MTN8 final.

"SuperSport are a good team, they've that spirit that helps them win cups. I have already won my first career cup with this team... the MTN8. I want to achieve more, that's my dream," said Mahachi.

At Lucas Moripe Stadium tonight (8pm), SuperSport and Highlands meet for the first time since Matsatsantsa outwitted the Lions of the North via a lone strike by Bradley Grobler in the Wafa Wafa decider at Orlando Stadium.

"We played Highlands in the final of the MTN8 and they are a good team, a hard-working kind of a team. So we are not thinking that because we beat them in the final we can easily beat them again. It's a new game with new possibilities," Mahachi said.