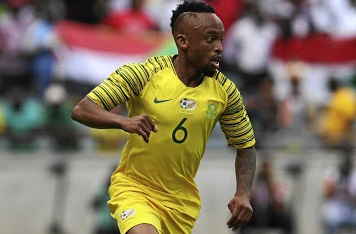 Does size really matter? In football, at least, it no longer seems to be the case.

More than before, height is not a major determining factor for overseas clubs and scouts, especially in Europe. Whereas in the past, clubs were more inclined to only sign the big boys in South Africa like Phil Masinga, Shaun Bartlett and Benni McCarthy, now the door is open to dynamite-sized players.

In the past few years the likes of Percy Tau, Keagan Dolly, Lebogang Phiri, Thulani Serero and Lyle Foster, to name a few, have signed with European clubs despite their diminutive frames.

The 25-year-old believes South African players have demonstrated they can make it regardless of their physical stature.

Bafana Bafana star midfielder Lebogang Phiri did not have the best start to the year after he was overlooked for the Afcon finals in Egypt.
Sport
2 years ago

"Our football has evolved in SA. We have players that are very tactical, and so we have a broader group to select from in terms of quality," Phiri said.

"In Europe, the emphasis has been about having a bigger build.

"Maybe in the past they thought we were not big enough or fast enough, but now things are different.

Chelsea development product Dean Furman admits that SA players have a better chance now to move to the top leagues in the world.

"I suppose the Barcelona team of Xavi, Iniesta, Dani Alves and Messi wasn't the most physical, but [those players] were incredible footballers," Furman said.

"I think we will see more local players moving to Europe because clubs are much more open to it now. The emphasis now is more on technique and ability rather than being a big guy."

Despite this, the SuperSport United skipper feels there are still some positions that require a physical presence.

"A position like in central defence still needs bigger guys, but in other areas if you're good enough it really doesn't matter."

Dynamite-sized players who've moved overseas in the past five years:

Sphelele "Pitso" Mkhulise gets no special treatment from his coach Pitso Mosimane despite sharing a name with the hard-to-please Mamelodi Sundowns ...
Sport
2 years ago