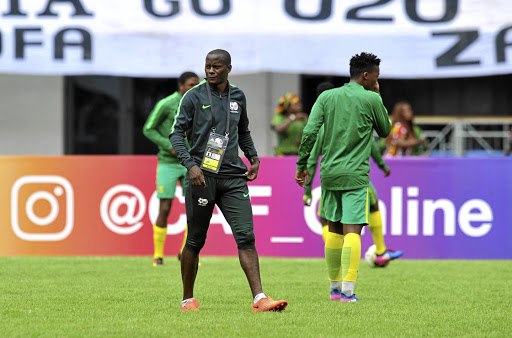 Amajita assistant coach Helman Mkhalele promises that a strong team will be selected for the World Cup in Poland. SA were drawn against Argentina, North Korea and Poland.
Image: Muzi Ntombela/BackpagePix

Amajita interim coach Helman Mkhalele says his charges are ready to defend their title at the Cosafa U20 Championship starting in Zambia today.

Speaking ahead of the team's departure to Lusaka, Mkhalele said they ticked most of the boxes during their training camp in Johannesburg and they are in the right physical and mental state.

Amajita are in Group B alongside Lesotho, Madagascar and Mauritius at this year's regional tournament which will run between December 4 and 14 in the Zambian capital of Lusaka.

South Africa start the defence of their title with a tricky clash against unpredictable Mauritius at the Sunset Stadium in Lusaka tomorrow.

"Physically and mentally we are ready for the tournament, we just need to go out there and perform up to the required standard. We are expecting a tough challenge from Mauritius," Mkhalele said.

Mkhalele 'promised' U20 job should he win Cosafa

Over the past few days, Mkhalele has overseen three practice matches where they won two and lost one.

"Players have shown confidence during our training matches, you could see that they are ready for any challenge that lies ahead and they know very well that representing the country is important," he said.

"The fact that we played and won two of the three practice matches that we have played will definitely help us with confidence because winning is a habit.

"This is the habit that is developing and they will take this confidence into the tournament.

"I am happy with the progress that they are showing as a team."