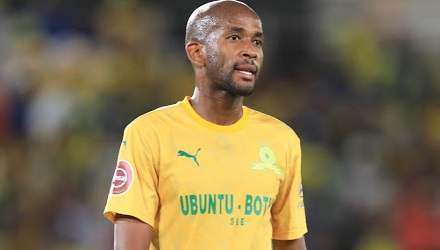 Sundowns defender Mosa Lebusa feels it's premature to talk about the captaincy of the team as the incumbent Hlompho Kekana has many years left in him.

Lebusa recently received high praise from coach Pitso Mosimane who suggested that the defender could skipper the team in future.

Kekana has been leading the club with aplomb since 2016, but at 34 is approaching the latter years of his career.

Since his arrival last year, Lebusa has been a pillar for Downs in the backline as a specialist left-footed central defender.

"I think we are fortunate at Sundowns to have a team full of leaders. My captain is Hlompho and it will remain like that for some time to come," said Lebusa.

Sundowns coach Pitso Mosimane has some injury and suspension issues to juggle as he takes on Petro de Luanda - who he says are “no slouches” - in ...
Sport
2 years ago

"There are many other leaders such as Denis Onyango, Wayne Arendse, Tiyani Mabunda, I mean the list is endless.

"Obviously, on a personal level it's a good feeling when the coach says something like that about you. I appreciate the kind words and I'll just continue doing what needs to be done for the team."

The 27-year-old was rested in Downs' 3-0 CAF Champions League Group C win over Petro de Luanda at the weekend. He'll be needed in the titanic clash against Wydad Casablanca in Morocco on Saturday. The Welkom-born chap admits it won't be easy in Casablanca where Downs have lost four times in a row.

"Playing in Casablanca is perhaps the most daunting stadium in Africa. Games there are like a spectacle and not many teams can come out of there with points," he said.

Also expected back for the Wydad encounter is Kekana who was also rested in the previous game, and Themba Zwane who has been sidelined with a hamstring injury for the past month.

After successfully reclaiming his spot in the Mamelodi Sundowns XI, defender Motjeka Madisha has now set his sights on returning to Bafana Bafana.
Sport
2 years ago