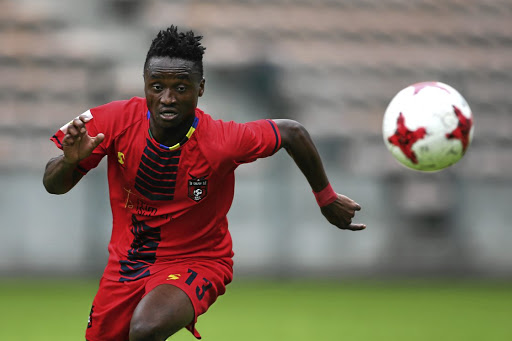 TS Galaxy are on course to defend the Nedbank Cup after advancing to the last 32 of the tournament by beating Cape Umoya 1-0 in the preliminary round on Sunday.

Coming off the bench in the second half, Khayelihle Shozi scored the decisive strike for the Ke Yona champions at Kameelrivier Stadium in a match in which Galaxy also missed a penalty through Moshe Gaolaolwe.

Galaxy finished the match with 10 men after Sihle Nduli was red-carded one minute before halftime. Shozi, the talented former Sundowns attacking midfielder, wasn't part of the Nedbank Cup-winning team because he only joined the Mpumalanga-based side in August.

Having joined the Rockets post their Ke Yona pinnacle, in which they stunned Kaizer Chiefs 1-0 at Moses Mabhida Stadium in the final in May, Shozi is determined to help Galaxy rewrite history by defending the Nedbank Cup.

Having dispatched of some big-name opposition in the Telkom Knockout, Kaizer Chiefs need to keep their focus in Sunday’s semifinal against supposedly ...
Sport
2 years ago

"As the defending champions, it's important to be on top of our game, always. I was not here when the team won it [the Nedbank Cup] and that motivates me to go all out in trying to make sure that I am part of another milestone . defending it," said Shozi.

"We want to make our fans proud. We are a well-supported team in the NFD [now known as the GladAfrica Championship], so we are not playing for ourselves but for the people who always fill up our stadium [Kameelrivier]."

"It was very difficult to play with 10 men, the red card was not necessary.

"It was irresponsible of Sihle . you are in the opponent's half and you tackle like that, also you should know that you can break somebody's leg. It made life difficult for us, we nearly went into extra time," said Malesela.

The Telkom Knockout final will be held at Moses Mabhida Stadium in Durban‚ the Premier Soccer League (PSL) announced on Wednesday afternoon.
Sport
2 years ago

Benni McCarthy: 'The referee was terrible‚ he might as well have just put on a Kaizer Chiefs shirt'