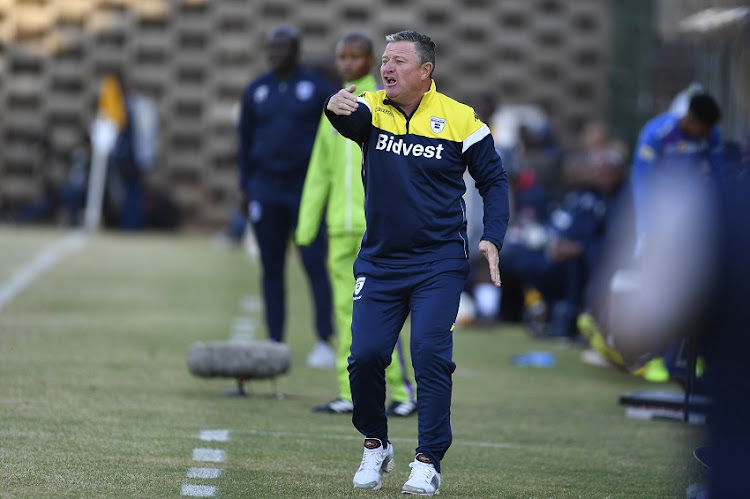 The ABSA premiership season may be three matches away from the halfway mark but BidVest Wits coach Gavin Hunt says the league title might as be handed to rivals Kaizer Chiefs.

Hunt said he can’t see Chiefs losing the title after opening a 10-point gap on second-placed SuperSport United and champions Mamelodi Sundowns‚ who are third and have played a game less.

“Chiefs have had‚ I mean I don’t want to talk about how they got there‚ but they’ve got a hell of a lead now.

"It doesn’t matter (that they’ve played only 12 games)‚ it’s a lead. The other teams got to win three or four matches in a row to catch them.

“Chiefs will have to lose three or four matches… they’ve only lost one. As I said‚ there’s been a lot of talk about how they got there but they’ve done this.”

Chiefs have won 10 matches‚ lost one and drew one to sit pretty on top of the log with 31 points ahead of hosting Bloemfontein Celtic at the Moses Mabhida Stadium in Durban on Saturday.

Wits‚ on the other hand‚ are four games behind most of the teams in the league as they continue to juggle Caf Confederation Cup commitments with domestic obligations.

It is for this reason that Hunt believe Chiefs already have one hand on the trophy and the race will be decided long before the end of the season in May.

Wits continue their African safari this weekend and will be away in Mali to play Djoliba in their second match of Group C in the Confederation Cup on Sunday.

They will only return to league matches on December 12 with an away clash at Lamontville Golden Arrows.

The Wits coach said not playing in Caf competitions gives teams like Chiefs some advantage in the chase for the league title.

“Look‚ it’s huge‚ it’s huge‚” said Hunt‚ who has four league titles under his belt with two different clubs (three with SuperSport and one with Wits).

“It’s ok if you could get a flight to there and get out like you play in the Champions League in Europe where you fly for an hour or two.

“But (in Africa) you’ve got three flights to Mali. That’s the problem. To get back and then you play on a Wednesday.

“So you get back on Tuesday at 5 in the morning and you’ve been travelling since Monday morning.

“And you’ve got to get another flight on Tuesday morning to go to Durban to play on Wednesday night. So that’s the problem.

“It’s only because of the time of the travelling. It’s not about the games‚ it’s about getting there and getting back.”