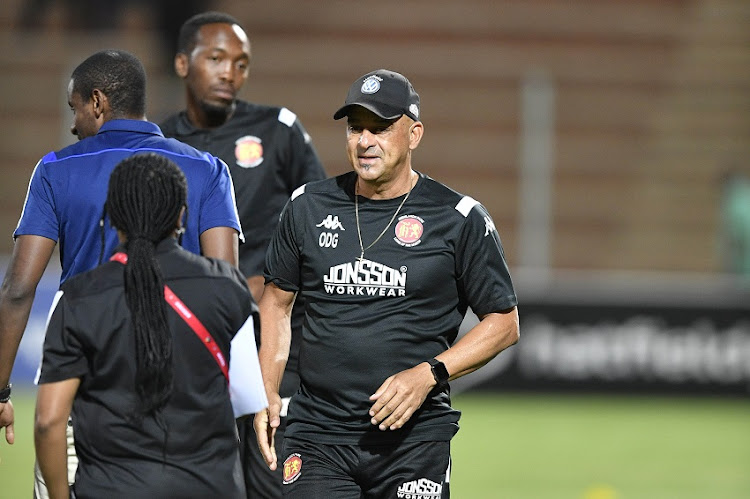 Highlands Park coach Owen Da Gama refused to comment on the legitimacy of a seemingly controversial injury-time penalty that saw his team having to settle for a 1-1 Absa Premiership draw on Tuesday night.

Home side Highlands had edged play‚ and seemingly done enough to secure a 1-0 victory at their Makhulong Stadium stronghold against Wits‚ until referee Victor Gomes blew for a handball in the area by Park substitute Bevan Fransman seconds into added time.

No-one in the stands saw the incident‚ though in fairness to Gomes he was‚ of course‚ far closer to the action. With the match not televised there have been no replays to clarify the matter.

“I’m very‚ very disappointed. Sometimes you don’t know whether you should laugh or cry‚” Da Gama said at the manner of his team’s last-gasp slip at securing victory‚ having until then preserved the lead from Peter Shalulile’s 41st-minute spotkick.

“The players do so well‚ they work so hard. And to draw a match in that fashion – I think it’s very unfortunate.

“But you know‚ we are not at liberty to talk about Wits‚ talk about the referees or anybody. We can only reflect on what we’ve done.

“I’m very proud of the boys. This is only their second season in the league. Wits are a seasoned team.

“And to come and put up a performance like that where Wits were just nullified‚ Deon Hotto was nullified‚ and they were totally nullified … .

“But‚ at the end of the day we can work so hard. And sometimes a result like this doesn’t go your way.

“We did everything that we could. We played the best football. We created more chances.

“The only way Wits were going to score was from a set piece. They got seven set pieces in a row and then the penalty.”

Pressed on whether he believed the penalty was the correct decision‚ Da Gama would only say: “I’m not even going to talk about that. I don’t want to talk about penalties.

“It’s for everybody to see whether it was a penalty. But I can tell you the [Highlands] supporters are very angry.”