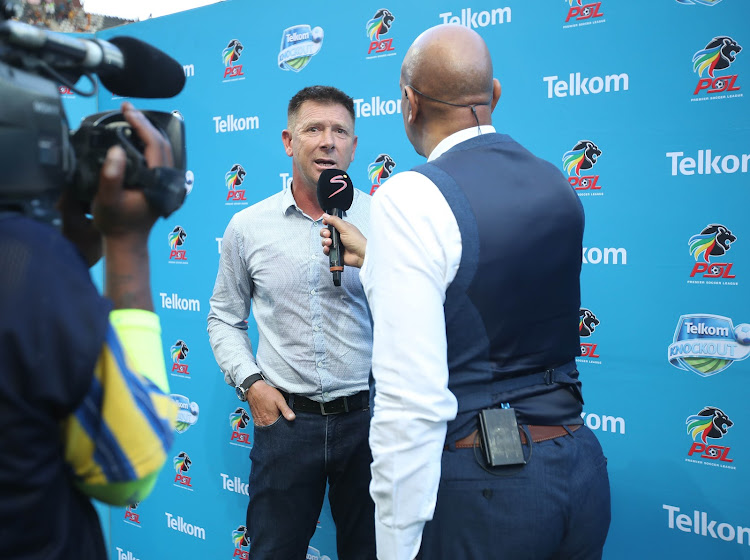 Maritzburg United coach Eric Tinkler is pleased with the performance from his charges.
Image: Samuel Shivambu/BackpagePix

Eric Tinkler admits he delivered a blast to his wasteful Maritzburg United side at halftime of their 2-1 Telkom Knockout semifinal victory over Kaizer Chiefs and believes they should have scored “six or seven” goals to humiliate the AmaKhosi on Sunday.

Maritzburg were full value for their victory‚ handed to them via a brace of goals by striker Judas Moseamedi‚ but Tinkler was left fuming by the number of simple chances they missed against a lackluster Chiefs outfit.

“We could have punished them today. That is no disrespect to them … but the chances we created‚ they weren’t half-chances‚ it is clear-cut chances‚ we could have scored six or seven‚” Tinkler said.

“I’m a winner. I want to win things and achieve things.

"That rubs off on the players. My expectations are very high.

"That is why I came in at halftime‚ when we are 1-0 up‚ and I’m screaming and shouting because I am angry. I expect more.

"But I know they are.

“As coaches we are tired of saying‚ ‘we are creating chances and not scoring’. And that was the anger that I had at halftime.”

Despite his frustration with the finishing‚ Tinkler hailed his side for the way they created those opportunities‚ and the way they largely kept the Absa Premiership leaders Chiefs at bay.

“If I look at the first half‚ five or six clear-cut chances‚ at least three we should have scored. We should have come in at halftime comfortably in the lead. Our transitions were exceptionally good.

“Defensively they did not cause us many issues‚ on the counter-attack we could have done better in certain situations.

“It was a fantastic performance‚ but we let them off the hook and left that door open for them to come back. I told the players at halftime that it was very important to kill off the game.

“So I was not happy at halftime‚ even though we were 1-0 up. I was extremely upset. Because I felt that was a fantastic opportunity to really kill them.

“We started the second half well‚ another two‚ three‚ four clear-cut chances and they don’t score. Then you get punished at a set-piece and they come back into the game.

“But credit to the boys‚ they kept going‚ kept working. We got the winner and then at the end had to hold on a little bit‚ but we handled it.”

Tinkler can now look forward to a second cup final in the Telkom Knockout after he surprisingly led new boys Cape Town City to the title in 2016.

He can also help erase the memory of Maritzburg’s 1-0 loss to Free State Stars in the 2018 Nedbank Cup decider‚ their only other knockout final.

“I’m very happy for the team and the club.

"This is a club that have reached a final for the second time in their history‚ hopefully we can end it off by lifting the trophy.”

Golf legend Gary Player: 'People are scared to invest in SA today because of crime'

SA golf legend Gary Player has decried the high levels of crime that have spiraled out of control in the country.
Sport
2 years ago

Why former Bafana stars Williams‚ Mokoena and Tau are giving back