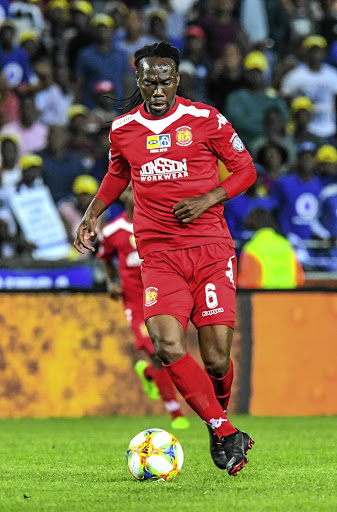 Reneilwe Letsholonyane of Highlands is confident they will bounce back.
Image: Sydney Seshibedi/Gallo Images

Having started the season spectacularly, where they lost only one of their first five league games, amassing two wins and two draws in the process, a feat that was cherry-topped by reaching the MTN8 final, Highlands are now winless in their past four outings, with two draws and two defeats in all competitions.

They last recorded a win last month, beating Chippa 2-0 in a home league fixture. After the win, Highlands lost to Pirates (0-1) and Celtic (1-3), before playing to a goalless draw with Stellenbosch in their last league match.

In between their three-game winless run in the league, Highlands were dumped out of the Telkom Knockout by Maritzburg United, losing 4-3 on penalties after the match had finished 1-all.

"It's a difficult period for us, we played for three weeks back-to-back games . it was with travelling, that schedule was a bit taxing," said Letsholonyane on the sidelines of the Discovery Walter Sisulu Soccer Challenge launch in Sandton on Monday. "We play a high-intensity game, so at some point it is bound to happen where you get a slump because of tiredness and the performance drops."

The ex-SuperSport United midfield ace has, however, vowed they're working tirelessly to return to winning ways. "We've done a lot of debriefs after games, seeing where we've been getting it wrong.

"We got two weeks off from the Fifa break and that allowed us to look deep into our mistakes. Things will come together in our next game against Wits (November 26)."

As a youngster, Letsholonyane's football skills were honed at the Discovery Walter Sisulu Soccer Challenge, playing for his township side PJ Stars. In its 16th year, this year's edition of this kasi developmental tournament starts from December 1 to 29 at Nike Centre in Klipspruit, Soweto.

Highlands Park coach Owen da Gama opted to place the experienced Reneilwe Letsholonyane on the bench against his former club SuperSport United in the ...
Sport
2 years ago
Next Article