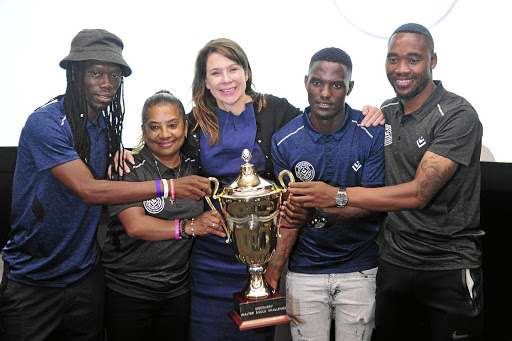 Having made a number of miraculous convalescences ahead of schedule, Mamelodi Sundowns attacking midfielder Sibusiso "Villa" Vilakazi has shed some light on what helps him heal faster.

In October last year, Vilakazi had a surgery on his Achilles tendon. The injury looked to have all but ended the 30-year-old's season and his dream to play at the Africa Cup of Nations (Afcon) in Egypt.

However, Vilakazi incredibly returned to full fitness in April, some three months ahead of schedule, and eventually made Bafana Bafana squad for the Afcon finals hosted by Egypt from June-July.

Speaking at the launch in Sandton yesterday of this year's Discovery Walter Sisulu Soccer Challenge - a developmental tournament that played a part in his development - Vilakazi explained why he's been able to recover ahead of scheduled time.

Sundowns coach Pitso Mosimane: 'I can’t go to Germany because they won’t take me'

"It's my mindset that helps me recover faster than expected. It's the mindset of knowing what's important in life,'' said Vilakazi.

"Football is important to me, so when I am injured I work extra hard to return because football is my life and it's very hard to watch from the stands.''

Vilakazi also credited the Discovery Walter Sisulu Soccer Challenge for the role the kasi tournament played in his career. In his childhood, the Brazilians ace, who hails from Meadowlands, used to turn out for Meadowlands Chelsea at this competition.

The challenge starts from December 1-29 at Soweto's Nike Centre, with 64 teams contesting. Sneke Chillers (defending champions) and FC Porto are some of the favourites.