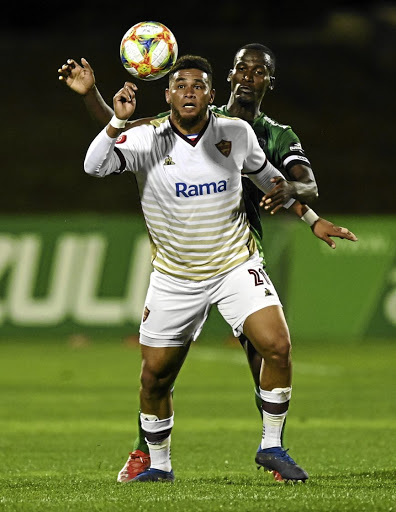 Waseem Isaacs of Stellenbosch FC is challenged by Tapelo Xoki of AmaZulu during the Absa Premiership match at Princess Magogo Stadium on November 6.
Image: Gerhard Duraan/BackpagePix

From being a familiar face at Fifa headquarters in Switzerland, fighting for his clearance with Slovakian outfit Michalovce in 2012, to being idle the entire following season, Stellenbosch striker Waseem Isaacs could have easily given up on his football career.

Isaacs, 28, has been in blistering form for rookies, Stellenbosch, netting four goals in 10 league outings. To be where he is today, the Bonteheuwel, Cape Town-born marksman had to shrug off some off-field controversy earlier in his career.

"In 2011 I signed with Michalovce. I stayed for a season-and-a-half there. I decided to leave the club because of various on and off-field reasons, but the club was reluctant to release me because I had a one-year option on my contract. I just left. They took the matter to Fifa,'' Isaacs told Sowetan.

"I was in and out of courts at Fifa offices in Zurich, Switzerland, trying to get my clearance. I attended the matter for the whole season, without playing. it was frustrating. The reason I eventually won the case was that the contract was written in Slovakian language, so they [Fifa] realised I signed something I didn't understand.''

Still, the bulky Stellies forward feels his troubled overseas stint played a pivotal role in his growth as a player and as person.

"I cannot lie, it was very difficult to stay in Slovakia. The food wasn't good and I was forced to play at right-back while I am a striker,'' Isaacs reflected.

"But when I look at it now, I see it toughened me up, both as a footballer and as a person. The lessons I learnt there are priceless.''

The 28-year-old striker joined Stellenbosch before the start of the season, from Ubuntu Cape Town, where his last term's 13 goals proved insufficient to help the Mother City side stave off relegation to the ABC Motsepe League from the second tier.

Isaacs may be banging in goals, but the former Ubuntu man isn't focused on challenging for the Golden Boot, putting Stellies' collective dream of finishing in the top eight first.