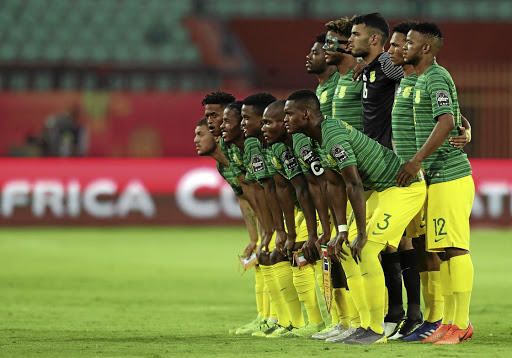 South Africa U23 team pose for a photo before the game against Ivory Coast in Egypt. / Mohamed Abd El Ghany/ REUTERS

Facing Nigeria in what is their last Group B fixture of the ongoing Under-23 Africa Cup of Nations in Egypt tonight (8pm), SA need one point to qualify for the knockout phase.

SA top their group, having accumulated four points, with Nigeria and Ivory Coast one point adrift in the second and third spots respectively, while Zambia are bottom with just a single point.

SA have a date with destiny against familiar foe Nigeria

South Africa have a date with destiny against a familiar foe on Friday when they tackle Nigeria in their final Group B game at the 2019 Africa ...
Sport
2 years ago

Avoiding a defeat would be enough for David Notoane's boys to advance to the knockout phase of the eight-nation tournament that serves as a ticket to next year's Olympics in Tokyo, Japan, where the top three finishers in Egypt will represent the continent.

While chronicling how he orchestrated the sublime free-kick that sunk Ivory Coast, saying he copied the technique from Barcelona superstar Lionel Messi, Mokoena has stressed the importance of keeping another clean sheet against Nigeria tonight.

"I watch Messi, one of the free-kicks he scored last week. I saw he walks before he kicks it, he doesn't run, so I am trying that technique.

"I saw it from him that if you run you don't have that much balance. Against Nigeria, we must fight to keep a clean sheet because that will mean we don't lose, which is enough for us to go through to the next round," said Mokoena.

A brilliant free-kick from Teboho Mokoena sealed a 1-0 victory for South Africa over the Ivory Coast and kept them on course for a semifinal place at ...
Sport
2 years ago

A brilliant free-kick from Teboho Mokoena sealed a 1-0 victory for South Africa over the Ivory Coast and kept them on course for a semi-final place ...
Sport
2 years ago

Teboho Mokoena's sublime free-kick that handed SA a 1-0 victory over Ivory Coast at the ongoing Under-23 Afcon in Egypt on Tuesday has given coach ...
Sport
2 years ago
Next Article