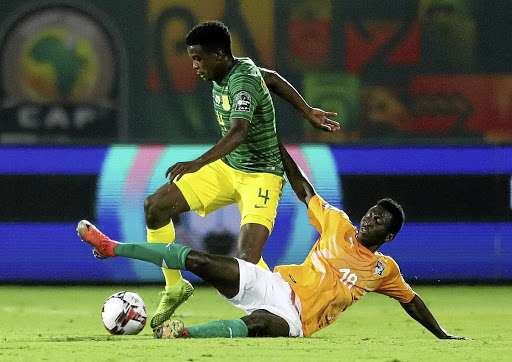 Teboho Mokoena's sublime free-kick that handed SA a 1-0 victory over Ivory Coast at the ongoing Under-23 Africa Cup of Nations (Afcon) in Egypt on Tuesday has given coach David Notoane the free-kick responsibility headache.

Having missed the goalless Group B opener last Saturday versus Zambia due to his club's reluctance to release him before the Fifa break, Mokoena substantiated why Notoane had been bemoaning his absence at the start of the tournament.

The SuperSport United midfielder produced a moment of magic just 11 minutes before the end of regulation time.

The win put South Africa top of the group on four points, needing just a point in their last pool tie against Nigeria tomorrow (8pm) to qualify for the knockout stages.

Admitting that Mokoena's magnificent free-kick left him stunned, Notoane gave an impression that the 22-year-old midfielder wasn't supposed to take the decisive set-play, implying Luther Singh and Sipho Mbule are the designated dead-ball specialists in the team.

A brilliant free-kick from Teboho Mokoena sealed a 1-0 victory for South Africa over the Ivory Coast and kept them on course for a semifinal place at ...
Sport
2 years ago

"But yeah, Mokoena, we were also surprised actually. But sometimes it happens in football, when a player feels he's got that mojo, he's got that feeling that this is the one for him, you withdraw as a coach and it worked out well for us."

After all, the SA Olympic team mentor understood and accepted that players sometimes take decisions that weren't discussed as part of the game plan.

"You have to be flexible, because the players are the ones playing the game. We prepare, we do set-plays at training, we decide who kicks, we decide who goes where," said Notoane.

"But sometimes you have to give players that 10, 20, 30% opportunity for them to react to how they see the game."

A brilliant free-kick from Teboho Mokoena sealed a 1-0 victory for South Africa over the Ivory Coast and kept them on course for a semi-final place ...
Sport
2 years ago

David Notoane has revealed that Teboho Mokoena was not on free-kick duty against the Ivory Coast‚ but stepped up to score a brilliant winner from ...
Sport
2 years ago

South Africa will open their Africa Under-23 Cup of Nations Group B campaign against Zambia in Cairo on Saturday and will be relieved to get the ...
Sport
2 years ago
Next Article