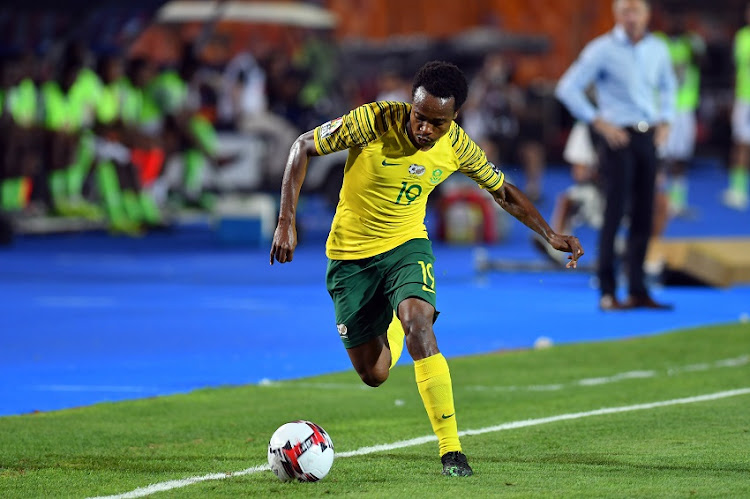 Percy Tau will go into Thursday’s 2021 Africa Cup of Nations qualifier against Ghana with nine goals in 23 appearances for Bafana Bafana‚ and on the brink of entering a select list of players.

Only 11 players have reached double figures in terms of goals scored for Bafana since readmission in 1992‚ a paltry number to say the least‚ but Tau could join them against the Black Stars in Cape Coast.

What’s more‚ the Club Brugge forward would be the second quickest Bafana player ever to reach that mark‚ and comfortably so.

Benni McCarthy took 18 games to score his first 10 Bafana goals and heads the list as the fastest to that mark‚ going on to become the country’s record scorer in internationals with 31 goals.

McCarthy would net 21 goals in his next 62 internationals as his scoring rate plummeted in a national team jersey after the fast start.

Tau could have joined McCarthy on the list after 18 matches had he not missed a sitter for his hat-trick in the 2-1 victory over Libya in March‚ though it is tough to be too critical after his two wonderful strikes handed Bafana Nations Cup qualification in Egypt.

He has not netted a goal since in his last five internationals.

Tau‚ should he score in his next four games‚ would still stand alone in second place on the list‚ with Katlego Mphela (28 games) the second quickest so far to 10 goals.

Mphela is followed by Phil Masinga (29 games) and Shaun Bartlett‚ who took 30 matches to hit that mark.

Unlike McCarthy‚ Bartlett quickened the pace with 19 goals in his next 44 games‚ almost one every other match.

Perhaps surprising on the list too is Bernard Parker‚ who took 44 games‚ this after netting seven in his first 17 matches‚ but then only three in the next 27.

The slowest to reach 10 goals was Siphiwe Tshabalala‚ who hit that mark after 71 caps‚ though many of them were spectacular efforts‚ not least his most famous against Mexico at the start of the 2010 FIFA World Cup.

Former Kaizer Chiefs star Doctor Khumalo would also have joined the list after 48 games‚ but he missed a penalty in a 2-0 loss to Trinidad & Tobago in 1999 and ended his international career with nine goals.