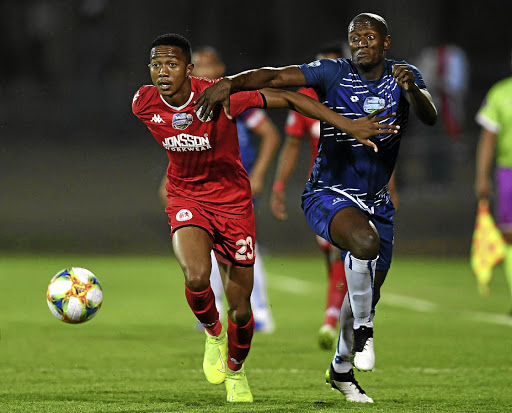 It is well-documented that players, particularly in the past, had to let their education fall by the wayside if they were going to make it in professional football, given the time and dedication needed to excel at the highest level of the beautiful game.

It is, therefore, unsurprising that only a few footballers hold tertiary qualifications. Highly rated Highlands Park defender Given Msimango, 23, represents the new generation of players who value education, while their football trade is still at its peak.

"I'm not yet a graduate, I am still in a process of getting my degree. When I started playing professional football [in 2017] I switched from doing my degree full-time to part-time, so it's taking a bit longer than expected. It's a BCom accounting degree [from the University of Johannesburg]," Msimango told Sowetan.

As much as Msimango is hell-bent on eventually graduating, the Lions of the North defender admits juggling football and studies is quite taxing at times.

"Studying while you're playing football professionally is not as easy as it may seem... with the hectic training schedule for professional footballers it's not easy," noted Msimango, who launched his football career via Varsity Football with UJ, before joining Highlands.

"But I feel if you want something you find a way to make things work. Elements like time management come into play, planning, goal setting... all these elements help me juggle things better."

Msimango, from Leachville, near Brakpan on the East Rand, also narrated how he opted to pursue an accounting course.

"I've always been a numbers guy and by numbers I don't mean maths but moneywise... I've always wanted to know how money works, how to grow it and maintain it for future wealth."

The SA U-23 international comes from a family of academics as his older siblings Mpumi and Antony studied auditing. "I guess it runs in the family," said the cheerful Msimango, the third-born of four children.

However, football was always Msimango's priority.

"My love for football has been there for as long as I can remember. Going to school or becoming an academic was secondary for me. Football always took priority. My mother [Florence Msimango] can attest to that. But I'm always thankful I have an opportunity to become both."