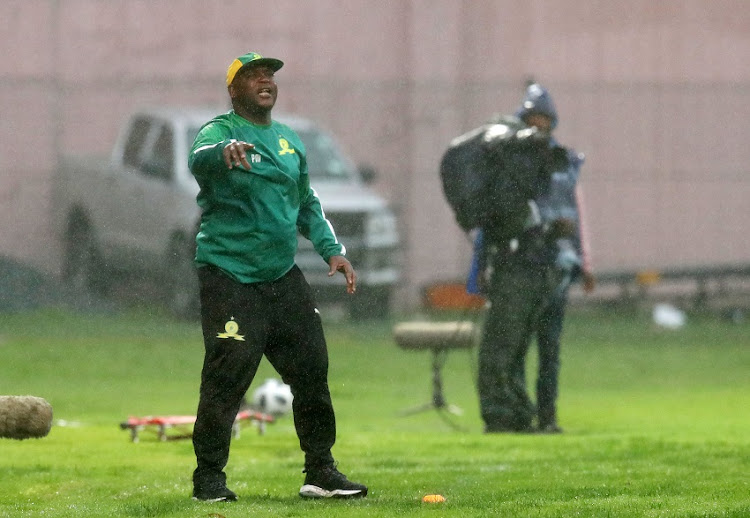 Pitso Mosimane, coach of Mamelodi Sundowns during the Absa Premiership 2019/20 match between Golden Arrows and Mamelodi Sundowns at the Sugar Ray Xulu Stadium, Clermont on the 10 November 2019.
Image: ©Muzi Ntombela/BackpagePix

Mamelodi Sundowns coach Pitso Mosimane is not losing any sleep over Kaizer Chiefs’ impressive 10-point lead at the top of the Absa Premiership table.

Sundowns lost further ground on Chiefs after their 3-2 defeat to Golden Arrows at the Sugar Ray Xulu Stadium on Sunday but a nonchalant Mosimane wasn't too bothered.

“If you focus on other people you will lose the plot‚ you need to focus on yourself.

"We know how to win the league because we have won it four times in the last six years and the other two years finished second‚” Mosimane said.

“We are running our own race and there are a lot of things happening like the unfortunate situation with Denis Onyango’s mistake against Golden Arrows.

"We didn’t have him (Onyango) for the past two games because his father passed on.

“These things are part of football and you must remember that we have been to four provinces over the last five days and that is not funny but just the way the programme is.

"We were in Port Elizabeth‚ back to Gauteng‚ then went to Polokwane and now we are In Durban.”

Chiefs enjoy a healthy 10-point lead at the summit but the outspoken Mosimane said they are only five points behind Amakhosi according to his calculations.

“This is not new to us‚ what we need to focus on is Sundowns‚" he said.

"At this point in time we are five points behind according to our programme.

"If anybody says they have more than five than us‚ good luck to that person because it means they have done very well.

"You can’t be looking at your neighbor with a new car and say that you also want a new car.

"You must focus on yourself and your processes.

"You can talk about ten points but we are five behind in our programme.

“They (Chiefs) have the edge‚ they have the lead because they are winning matches.

"You can question how they win games and they are doing very well.

"We have to stay calm because we have a bigger programme‚ after the Fifa break the Champions League starts.

"I need Sirino and Zwane back but I can’t rush them because I risk losing them for a longer period.

“I don’t want to focus on Chiefs‚ for the last six years we have ran a race with all the teams.

"At first we ran the race for three years with Chiefs where we won it twice and they won it once.

"We ran the race with Wits for two years and they won it once and then lost it to us.

"Then we ran the race with Pirates and won.”