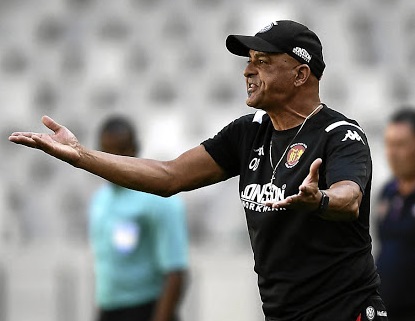 In his typical voluble self, Highlands Park coach has hinted that people should
lower their expectations of the Lions of the North given the club's winless run across all tournaments.

The Tembisa outfit have gone four games without a victory in all competitions.

When asked what he attributed his team's recent unconvicing form to, Highlands Park coach Owen da Gama said yesterday: "Sundowns have gone four games without a win and they're a big team, so I do not know what you  expect me to say.

"[It is] Highlands Park's second season in the PSL and I think we've had two quick successes. people expect us now to be winning every game. We are still a new young team.''

"We've had a lot of injuries and we've played a lot of games consecutively.

"A lot was taken out of the team when we had to play extra games for the MTN8 final when other teams were resting,'' said Da Gama.

"People should look deeper into it and say how did we lose certain games . It's easy to look at results, but you got to look at the bigger picture.''

With their next match only in nearly three weeks time against Bidvest Wits on November 26, Da Gama explained how he aims to use the break, saying he'll give some regulars time to rest.

"It allows us to work on other players. No team has played more games than us in the past five weeks. It's a fact and figures are there. So, we need to give these players a bit of a break and we'll regroup,'' he said.

"We'll have to give the players who have been playing match in and match out like the Ryan Rays, the Mbathas, some break.three, four days' rest."

Maritzburg United must brace themselves for war against Highlands Park in the quarterfinal of the Telkom Knockout that will be played at Harry Gwala ...
Sport
2 years ago

As Orlando Pirates prepare to face Chiefs in the quarterfinal of the Telkom Knockout in Durban on Saturday, their young coach Rulani Mokwena has ...
Sport
2 years ago
Next Article