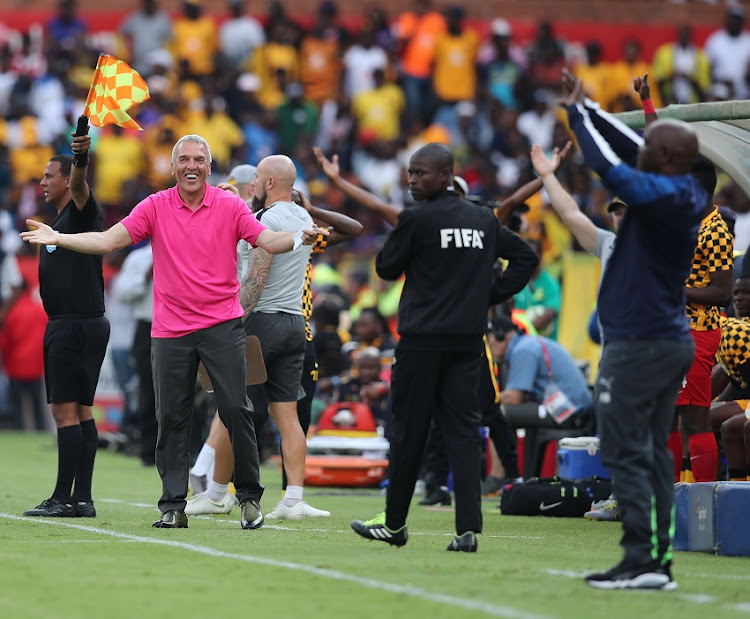 The result extended Amakhosi’s lead at the top of the log and was made more impressive by Middendorp resting much of his first team ahead of Saturday's second sold-out derby in a week against Pirates at FNB Stadium.

Pirates' coach had said after this past Saturday’s Telkom Knockout quarterfinal derby at Moses Mabhida Stadium‚ won on penalties by Chiefs‚ he had at times felt like “Picasso admiring the Mona Lisa”‚ in praise of his team’s football.

“I’m not really interested in this‚” Middendorp said in Port Elizabeth on Wednesday night‚ responding to a question on Chiefs' lead.

“I know that just with the number of games we’ve played so far we haven’t even reached halfway in the season yet by far.

“I’m not talking about how tactically superior each and everybody is. How somebody paints some pictures‚ or painting out of the renaissance‚ or talking about a Spanish painter or an Italian artist.

“I try to figure out what’s good for us to get points. Now it’s a very crucial moment to find the right combination for the weekend.

Middendorp‚ known for his cantankerousness‚ has the ability to rub fellow PSL coaches the wrong way.

His relationship with Bucs’ 32-year-old caretaker-coach Mokwena had appeared to get off on the right footing‚ as the Pirates boss professed respect for Middendorp’s technical ability last week ahead of the past weekend’s derby.

Mokwena‚ though‚ appeared ungracious in his post-match statements‚ when he claimed Pirates were the “one team on the field”‚ when in fact‚ Chiefs had dominated play going to 2-2 by the end of extra time in an exciting TKO quarter.

Middendorp then took a dig at Mokwena’s Picasso statement on Facebook on Monday‚ posting that it was Leonardo da Vinci who painted the Mona Lisa.

Mokwena replied in Pirates’ post-match press conference to their 0-0 draw against Maritzburg United at Orlando Stadium on Tuesday night that his statement had referred to Picasso “admiring”‚ and not painting‚ the Mona Lisa.

“Art wars” in the PSL – who could have predicted such a thing?