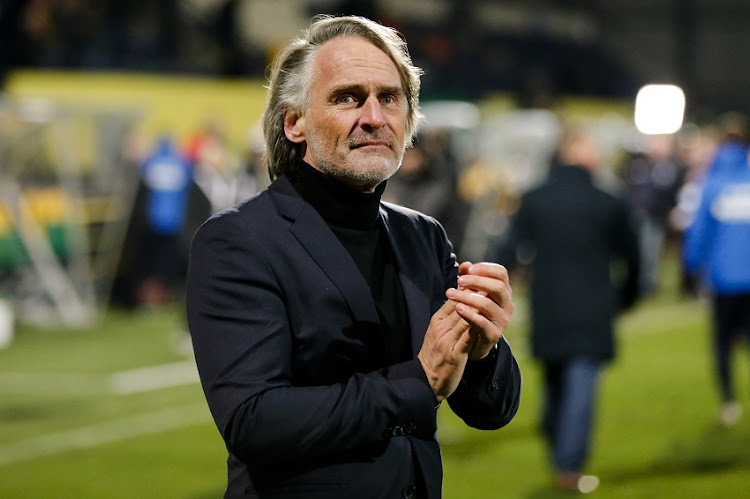 New Cape Town City coach Jan Olde Riekerink has worked with a number of South African players in the past‚ including the man he has replaced at the club‚ Benni McCarthy.

Olde Riekerink was appointed by City on Wednesday after McCarthy was axed following a poor start to the season‚ his promising tenure in Cape Town brought to an end a few months into his third season.

Dutchman Olde Riekerink was in the stands to see his new side beat Polokwane City 5-3 in the Absa Premiership‚ and comes with experience of working at top clubs such as Ajax Amsterdam‚ FC Porto and Galatasaray in Turkey‚ as well as most recently Heerenveen‚ where he was last season.

“I have worked with South African players like Aaron Mokoena‚ Steven Pienaar‚ [Gabriel] Mofokeng‚ though he did not finally succeed. And‚ of course‚ Benni I had at Ajax and FC Porto [where he was assistant coach]‚ so we have these connections‚” Olde Riekerink said.

He adds that he knows City owner John Comitis through the Ajax Cape Town connections‚ and is delighted to link up with him again.

“I’m very much looking forward to it‚ I like it here in Cape Town. I know John‚ we spoke about the cooperation on Monday and how we want to work together. I like the project.

“John is one of the reasons I came‚ I have worked 11 years for Ajax and he knows the way we worked in Ajax‚ that makes it easier.

“I have watched a few [City] matches. They did not play bad‚ but I see opportunities to grow them.”

Olde Riekerink says it did not take much persuasion to get him to come to Cape Town‚ where he will link up with a couple of Dutch players in the squad such as goalkeeper Peter Leeuwenburgh and playmaker Chris David.

“He [John] just asked me how much I want to earn! No‚ I am joking‚ John has a lot of ambition and I know he also has a very good relationship with Benni‚ so it is not easy. But we know each other and that is the reason he asked me‚” he said‚ adding he had been given no mandate with the team.

Olde Riekerink says his time abroad‚ which also includes coaching in Ukraine and China‚ has seen him adapt his philosophy from that of a typically ‘Ajax-developed’ tactician.

“I grew up in Holland with the Dutch philosophy‚ but I have trained so much abroad that it comes down to the fact that you have to win the game. It is not only about playing good football‚” he says.

“Wherever you coach and train‚ you have a group of players and you have to take care of them. You have injured players‚ disappointed players‚ players who play and those with certain talents that you have to find out and make them into a team.

“I might have grown up in Holland‚ but I developed abroad. At Galatasaray there were only internationals‚ and it was about managing them‚ not just educating them.

“This [City] is a combination I think‚ between [young] talent and players who already have the skills.”

Olde Riekerink is unlikely to be on the bench when the team travels to Black Leopards on Sunday as he waits for his work permit‚ with the side to be once again led by assistant coach Vasili Manousakis.