Chiefs at their best in five years 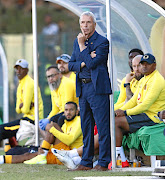 Kaizer Chiefs' resurgence this season will see them complete their best league start in five years.

As the team prepares to play their 10th league game against Chippa United in Port Elizabeth tonight (7.30pm), they are about to do something they haven't achieved since 2014.

Their current start is their best since the 2014/15 season under Stuart Baxter, where they were top of the table with 28 points in the opening 10 league games.

This season, Amakhosi are at the summit and have so far collected 22 points in nine league games. In the previous seasons under Steve Komphela and Giovanni Solinas, the club was not able to hit the ground running in the same way they have done so far.

In Komphela's first season (2015/16), Chiefs collected 17 points after the opening 10 games and were in position five. In the following campaign, they collected 16 points by the 10-game mark and were sixth.

In Komphela's last season, the team was seventh with 14 points. During the few months Solinas was in charge of them, Chiefs fell further down to position number nine after 10 games with only 11 points.

Chiefs coach Ernst Middendorp says their improvement stems from the refreshing of the squad that happened in the past few months.

"Players like [Mulomowandau] Mathoho, Lebo Manyama and other guys who have not been with the team for six months last season are "new" players. We have eight or nine new players compared to the average XI from last season. In terms of training sessions, intensity, approach and the mind-set, a lot has happened and we see it on the field."