Arrows fired up for 'double' over United 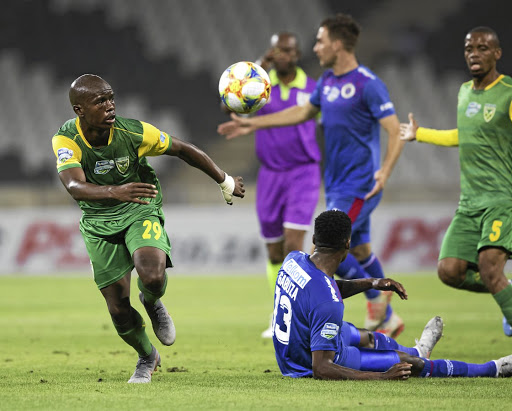 Nkosinathi Sibisi of Golden Arrows says they are determined to beat SuperSport United again tonight after defeating them in the TKO.
Image: Dirk Kotze/ Gallo Images

Golden Arrows defender Nkosinathi Sibisi has magnified their league clash against SuperSport United at Mbombela Stadium tonight (7.30pm) by underlining they aim to prove eliminating Matsatsantsa from the Telkom Knockout was no fluke.

Tonight's clash comes two days after Arrows dumped SuperSport out of the TKO, claiming a 1-0 win in the quarterfinals at the same venue at the weekend. Lindokuhle Mtshali netted the match's only goal. Aubrey Modiba missed a stoppage-time penalty that would have levelled matters.

"It's another big game for us, SuperSport are never an easy team to beat. But the fact that we beat them in the Telkom [Knockout] gives us confidence and I do not see why we can't beat them again," Sibisi told Sowetan yesterday. "Some people think it was just luck [to beat SuperSport], but we worked very hard for that win and we want to show again that it was not luck, but it was through dedication and game plan that we won on Saturday."

In the same TKO encounter, Sibisi, 24, scooped the Man of the Match accolade, his maiden in his professional career, having joined Arrows in 2015.

"The Man of the Match award means everything to me. Winning such accolades motivates you to keep on going."

Arrows and SuperSport are level on 13 points, occupying seventh and fifth spots on the table, respectively. Matsatsantsa are ahead by virtue of a better goal difference.

"Last season we didn't finish in the top eight [they ended 10th on the log] and that was because we lost so many points away. This time around we are determined to improve our away record, so it is important to not lose tomorrow [tonight] to boost our top-eight dream," stated Sibisi.