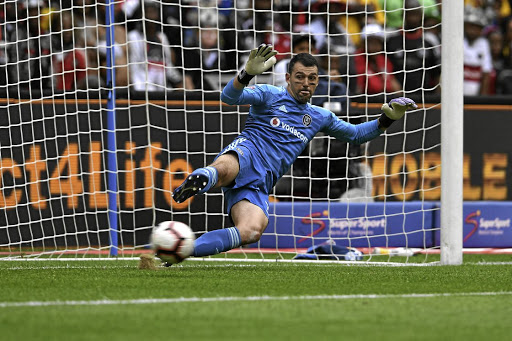 Wayne Sandilands has acknowledged the threat posed by Amakhosi forwards, having played with Billiat and Castro at Sundowns.
Image: Lefty Shivambu/ Gallo Images

If Kaizer Chiefs attacking unit's latest rich form is anything to go by, Orlando Pirates goalkeeper Wayne Sandilands could be one of the busiest players when the two Soweto powerhouses battle it out tomorrow (3pm).

In what's a sold-out affair at the majestic Moses Mabhida Stadium, Chiefs and Pirates clash for a spot in the Telkom Knockout semifinals. While a number Pirates' attackers have been rather flat recently, except for Tshegofatso Mabasa, their Chiefs counterparts, especially Samir Nurkovic, Dumisani Zuma, Leonardo Castro and Khama Billiat, have shown flashes of brilliance.

Fascinatingly, Sandilands acknowledges the threat posed by the Amakhosi forwards. Having played with Billiat and Castro at Mamelodi Sundowns, the Bucs man also underlined the pair's strengths.

"With regard to the strikers of Chiefs, any one of those can change a game. They've got those qualities about them. They've got unbelievable ability and skill, can do something out of nothing if required," said Sandilands at the match's media conference at PSL offices in Parktown yesterday.

It was something of a smash and grab, and with question marks over offside for the winner, but Orlando Pirates would have been relieved at a 1-0 Absa ...
Sport
1 year ago

"Look. we know it's going to be a challenge, but we can only take it moment by moment on Saturday and see what kind of questions they're posing to us as a defence on that particular day. We know what they are capable of and we will respect them.

"They're very creative. I know those guys, two of them [Castro and Billiat] from the Sundowns days."

With skipper Happy Jele certain to start tomorrow, between Ntsikelelo Nyauza and Alfred Ndengane, it's tricky to say who'll partner him at the heart of defence. But Sandilands thinks every squad player is ready to step up to the plate. "I know that whoever plays in those positions will be up to the task.

"They will know what's expected of them. Everyone is just focused," noted Sandilands, who has kept four clean sheets and conceded six goals from eight matches he's played in all domestic competitions so far.

"At Pirates there's so much talent and ability. Each and every defensive player boasts quality, so I do not mind what players play in front of me."

Orlando Pirates arrested their slump and suspended the nagging suspicions of being potential relegation candidates by bagging three valuable points ...
Sport
1 year ago

Orlando Pirates coach Rulani Mokwena says he has respect for Kaizer Chiefs counterpart Ernst Middendorp and is impressed with the structure the ...
Sport
1 year ago