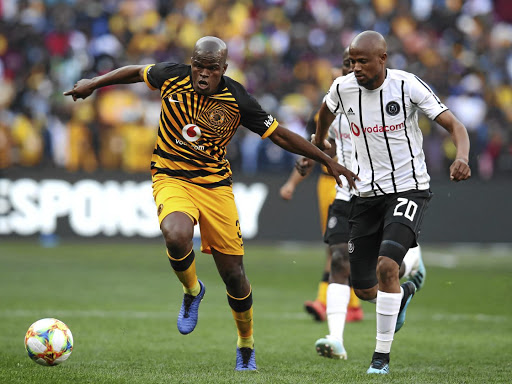 After a five-year winless run in the Soweto derby, Kaizer Chiefs midfield strongman Willard Katsande believes this season against a weakened Orlando Pirates could be their best chance to snap their drought.

The last time Amakhosi defeated the Buccaneers in a competitive match was back in 2015 in a penalty shootout in the semifinals of the Telkom Knockout. In fact, the last time Chiefs beat Pirates in regulation time was in 2014 in a 2-0 win under Stuart Baxter.

Katsande is one of the few players in the current squad who knows what it feels like to win a derby. "We know the history and haven't beaten them in a long time," he said.

"Last season we played well in the second leg of the league and we need to build on that performance. The derby is not based on previous results and is about who wants it more on the day. I think we want it more and will show it on Saturday."

Kaizer Chiefs maintained their rich vein of form by beating Lamontville Golden Arrows 2-0 at the FNB Stadium on Tuesday night.
Sport
1 year ago

Last season, Pirates got the better of Chiefs in the semis of the TKO with a 2-1 win in Durban. This season after Milutin Sredojevic left and Rulani Mokwena took over, the team has been struggling to find its feet.

Chiefs will look to avenge that loss as they face their rivals at the Moses Mabhida Stadium in the same tournament in a quarterfinal clash on Saturday (3.30pm).

"I have experienced 27 derbies and it's always difficult. We will take the game to them," he said. "It's up to us. Derbies are also more about the crowd because you can get carried away and not achieve your objective."