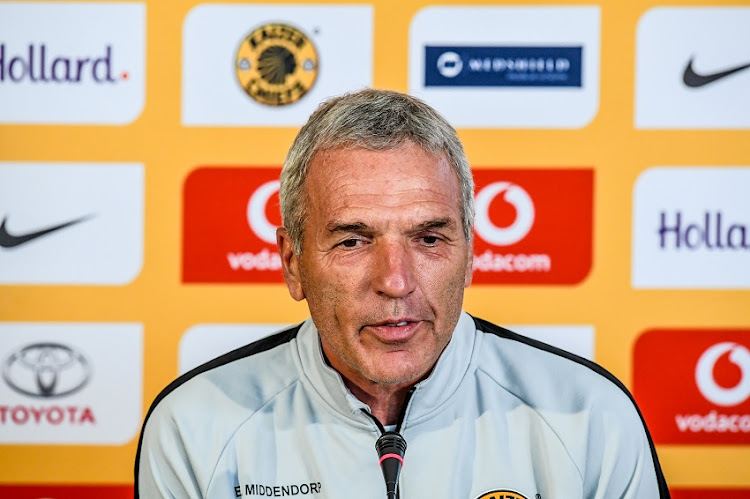 Kaizer Chiefs coach Ernst Middendorp exudes a calmer demeanour these days and has seemingly ditched the hot-tempered style that became his hallmark over the years.

The German mentor's temper tantrums are well-documented but he seems to have completed an amazing transformation this season‚ adopting a mellower aura that has seen him even warming up to the media.

Middendorp has maintained his cool even when provoked by outspoken rivals like Mamelodi Sundowns’ Pitso Mosimane and Benni McCarthy of Cape Town City.

The Chiefs coach revealed that the few months he spent in Thailand before AmaKhosi asked him to return to SA to replace Italian Giovanni Solinas in December last year laid the foundation for the massive transformation.

“In the culture of Thailand there’s no conflict‚" he said.

"It’s like they ‘don’t allow anybody to lose a face.’

“I was nailed like I was on the wall by the bosses over there‚ and then you start reflecting and you start sitting into it.

“I said it before‚ I think it’s (being calm) not to my disadvantage‚ or is it?”

The new outlook has certainly helped Middendorp navigate the difficulties of coaching a massive club like Chiefs that often attracts more more scrutiny than other sides.

He started his tenure on the backfoot as the club’s failed to finish inside the top eight last season and also embarrassingly lost to lower tier side TS Galaxy in the final of the Nedbank Cup in May.

He has managed to turn things around since those plunging those depths and he's spearheaded a revival at Naturena‚ leading Chiefs to the premiership summit - they are five points clear of defending champions Sundowns.

But his newfound persona will again be tested in the coming days as Chiefs face traditional rivals Orlando Pirates twice in the space of seven days in the cup and in the league.

Their first first meeting is in an eagerly-anticipated Telkom Knockout quarterfinal at the Moses Mabhida Stadium in Durban on Saturday.