Charges against Pitso piling up 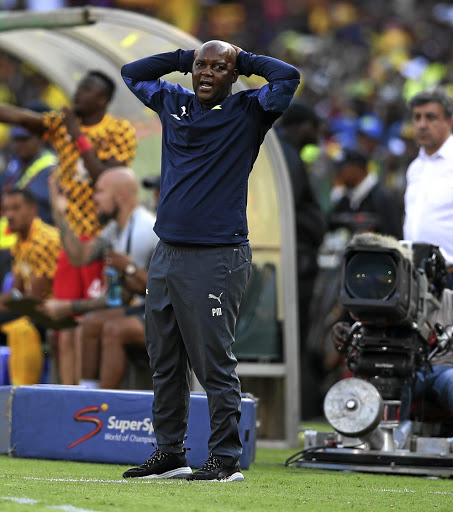 It seems it doesn't rain but it pours for Mamelodi Sundowns coach Pitso Mosimane as PSL prosecutor Nande Becker is preparing to slap him with a third disciplinary charge.

On Monday, the Premier Soccer League announced that Becker had served Mosimane with a letter demanding that he explain two incidents of improper statements against match officials.

In an interview with Sowetan yesterday, Becker confirmed that he had just received a report of a possible third charge against Mosimane.

"There is now possibly a third case because I have seen an issue about another statement on top of the two that we had already," Nande said.

"Basically, what we have asked him to do is to either admit or deny those statements attributed to him. The three are about comments towards referees."

Mosimane was given five days to respond, meaning the deadline should be on Friday. Becker explained the process that will follow after the PSL receives a reply from the coach.

"If he admits the statement then he will be charged. If he denies it we will call a press conference and he will have to deny it in public and pay for the costs of the conference," he revealed.

The outspoken Sundowns coach has on numerous occasions accused referees of favouring rivals Kaizer Chiefs and repeated his utterances after their 2-0 loss against Chiefs on Sunday.

Mosimane's misconduct cases from last season could open up a can of worms.

One loss does not mean anything - Pitso Mosimane

Mamelodi Sundowns have seen league challengers come and go. And with Kaizer Chiefs having emerged as the early contenders, Downs know that there is a ...
Sport
2 years ago

The first case was for his scuffle with a security guard, Satchmo Ngwenya, after a game against AmaZulu in September last year and the other for making improper statements after a match.

His recent misdemeanours could trigger harsher sentences as a repeat offender.

"From last season, [on] the issue of the statements he pleaded guilty and got a sentence, a portion of which was suspended. I can't remember the sentence," said Becker.

"He was also found guilty on the scuffle with the security guard but the sanction has to be determined. Unfortunately, one of the members of the DC who sat on the matter passed away unexpectedly."

He said the PSL may have to reconvene another DC for the sentencing.

Becker also confirmed that Cape Town City coach Benni McCarthy and Zlatko Krmpotic of Polokwane City are also set to be charged for their comments towards referees.