Mosimane takes aim at the Soweto derby: 'I don’t know if Pirates fans will allow it' 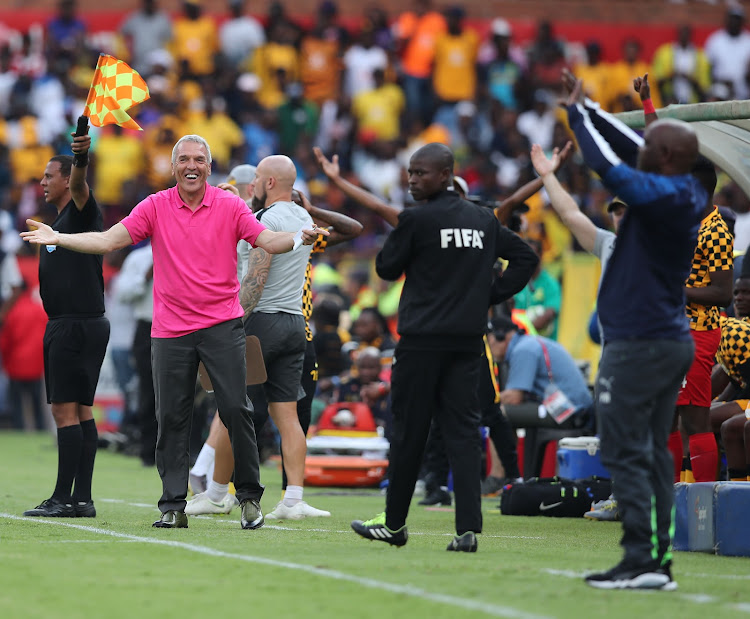 Fiery Mamelodi Sundowns coach Pitso Mosimane kept up his attack on Kaizer Chiefs and said his rivals have the match officials to thank for their 2-0 win at Loftus on Sunday afternoon.

Mosimane said the match officials should have ruled Chiefs’ opening goal by Samir Nurkovic offside and he's now waiting to see if his rivals will once again benefit from refereeing decisions when they face traditional foes Orlando Pirates in the Telkom Knockout quarterfinals in Durban on Saturday.

“By the way they (Chiefs) scored an offside goal‚ ne‚” said Mosimane‚ insisting that assistant Tshepo Nojila should have raised his flag when Nurkovic received the ball that came in the direction of Leonardo Castro.

“They benefited again because the first goal was offside‚ yes it was offside.

"It’s the same song and what are we talking about here‚ they benefited again from a mistake.

“You get scared to say and ask yourself when is this thing finishing‚ is this a spiral or what?

"I mean really‚ is this thing going stop?

"But this thing must stop because where are we going?

"We have to look at them again next week‚ I want to see if officials will make a mistake against Pirates.... let’s see.

“Something has to give in now‚ I don’t know if Pirates supporters will allow it.

"You can’t win every day by referee’s mistakes. It must stop‚ it’s enough.

"We have seen it before but now it’s worse‚ it is a series. It’s okay when it happens once but this is a series‚ is this a football match or what? Excuse me.

“We need a lot of praying when playing against this team‚ they must never benefit again.

Mosimane said his criticism of referees was not an attempt to discredit Chiefs’ win as the second goal was clear and there were no questions about it.

“We must never confuse the fight and the will of the team (Chiefs) to the mistakes of the referees‚" he said.

"Because it will look like maybe I am discrediting them‚ that maybe they don’t have the fight.

"No‚ they have a fight and you saw it‚ we have to give them credit but also there is an angel here.

“The second goal was a clear goal and there is no doubt about that.

"But you play under stress and pressure because you have to equalize and you are going to get caught somewhere.

"What else do we talk about Chiefs?

"It is the way it is and it doesn’t help.

"In my last eight games of the league‚ I also need people to make mistakes against other people. If it goes like that and I benefit‚ I will say yes I benefited.”

Kaizer Chiefs bagged all the three points at stake and the bragging rights after a deserved 2-0 win over title rivals Mamelodi Sundowns at a sold-out ...
Sport
2 years ago
Next Article