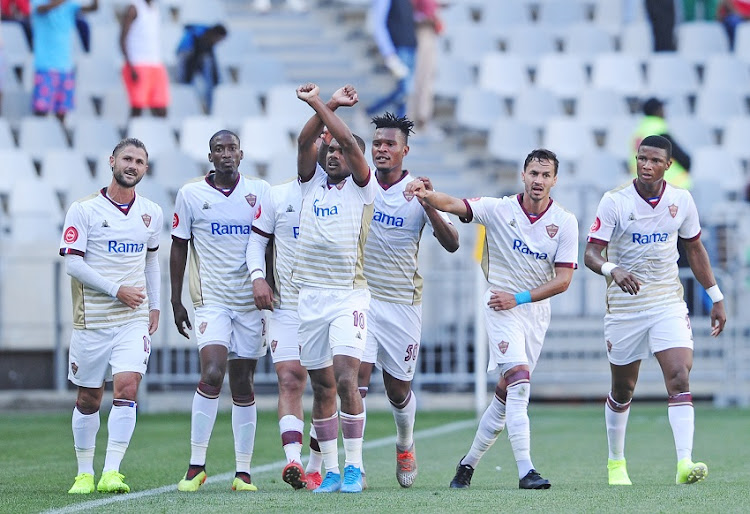 Iqraam Rayners took advantage of some sloppy defence as Stellenbosch rode their luck to pull off a shock 1-0 win over Orlando Pirates at the Cape Town Stadium on Saturday afternoon.

His 21st minute goal ensure a classic smash and grab success as Pirates pounded away but left with nothing in another performance without the requisite polish.

Stellenbosch were brave in defence and are now above Pirates on the log table.It was a game that started at a furious tempo as wave after wave of red-shirted Pirates stormed the Stellenbosch defence in swashbuckling style.

But, as was the case seven days ago when the two sides met in the Telkom Knockout, Pirates’ could not make the possession count.

Last week it was poor finishing but this time round some ferocious defending, led by Robyn Johannes with Mogamad de Goede and Sibusiso Mthethwa also in a three-man central defence, and Nyiko Mobbie and Marc van Heerden at fullback.

Thembinkosi Lorch probed but could not find the openings and when one eventually did come for Tshegofatso Mabasa in the 15th minute, when Johannes mistimed playing the offside trap, he dragged his effort across the face of goal and wide of the target.

Two minutes after that Stellenbosch keeper Boy de Jong tried to be too cute clearing a back pass and almost got caught by Mabasa.

But while he got away with that, a similar defensive slip at the other end soon after was punished.

Wayne Sandilands passed out to Alfred Ndengane, who then hit a shallow square ball to fellow central defender Ntsikelelo Nyauza that was picked off by Rayners, just outside the Pirates’ penalty box, and proficiently finished by last season’s top striker in the National First Division.

Two minutes later it could have 2-0 but Sandilands did well to save a thumping full volley from Waseem Isaacs, whose podgy frame kept the Pirates defence busy throughout the encounter.

Sixty second later Sandilands had to make a double save from Isaacs and Mobbie as suddenly Stellenbosch were storming forward.

But that did not last long and the game returned to the pattern of Pirates in possession and Stellenbosch defending as if their lives depended on it, again without forcing any saves out of De Jong.

Pirates were too slow coming out of the change room to make two immediate changes at the break, perhaps indicative of chaos behind the scenes at break.

It needed Sandilands to feign an injury to allow Kabelo Dlamini and Gabadinho Mhango to come on as half-time changes.The pair immediately injected some more energy into the Bucs attacks but again it was all too fast and furious for the most part.

Lorch did get a cracker on target in the 60th minute but de Jong made a strong save. He made an even better stop to deny a close in stab at the ball by Mabasa some 60 seconds thereafter.

Stellenbosch might have bagged a brilliant second when Van Heerden tried to catch out Sandilands from long range but he scrambled back to save and avoid another embarrassing concession.

Pirates kept piling on the pressure but got worse and worse with their finishing as panic set in.