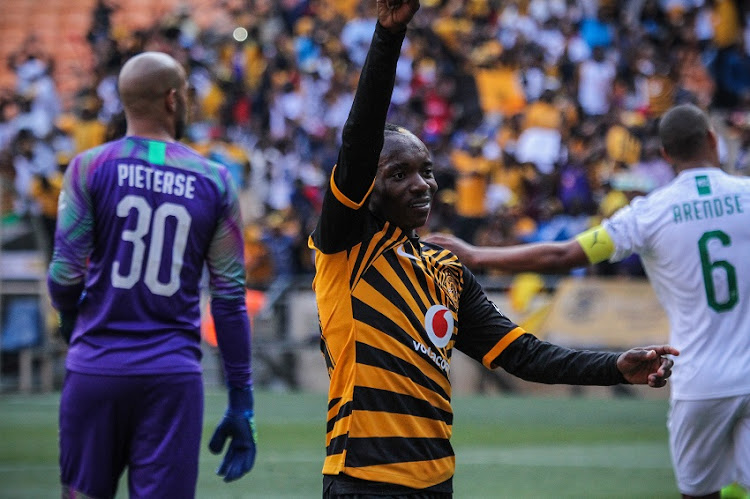 Khama Billiat of Kaizer Chiefs celebrates a goal During the 2019 Shell Helix Cup match between Kaizer Chiefs and Mamelodi Sundowns at the FNB Stadium, Johannesburg on 12 October 2019.
Image: ©BackpagePix

Mamelodi Sundowns coach Pitso Mosimane has identified “monster” Khama Billiat as the player with the capabilities to hurt his team in the eagerly-anticipated Absa Premiership clash against Kaizer Chiefs at Loftus on Sunday.

“The player who poses a serious threat to us is Khama‚” Mosimane said as the Brazilians prepared to welcome Amakhosi in what promises to be a thrilling match in the capital.

“He knows our secrets and we have created a monster in him. We taught him all the runs.

“This situation reminds me of when Pep Guardiola took Bayern Munich to play against FC Barcelona in the Champions League after his sabbatical. They gave him six goals at the Camp Nou and the menace was Lionel Messi‚ the guy who he worked with all the time.”

Mosimane‚ who was rumoured to be interested in bringing Billiat back to Sundowns in the off-season‚ said that the Brazilians played a large role improving the quality of the immensely talented Zimbabwean international.

“Besides what we gave him here at Sundowns‚ Khama is a talented football player. You can’t manage him but we have to do what we have to do to minimize his threats because you can’t stop him‚” Downs’ coach said.

“He poses a big threat to us – more than anybody to be honest‚ because he is scoring lots of goals and that’s why we like him.”

Asked if he will do a man-marking job on Billiat‚ Mosimane said Sundowns will stick to their tried and tested formula.

“I have not done that before because if you do man-marking‚ it means you follow me wherever I go and you only react after I have reacted. If I stop you stop‚ you also stop and you will get tired from doing that.”

The threat from current log leaders Chiefs will not only be limited to Billiat as coach Ernst Middendorp has other dangerous attacking players like Leonardo Castro‚ Dumisani Zuma‚ Bernard Parker‚ Samir Nurkovic and Kearyn Baccus.

Victory for Sundowns will see them move to the top of the log standings with one point lead and the possibility of winning the second Q-Innovation.

“It is sardines. Our focus is the big fish‚” Mosimane said about the PSL’s Q-Innovation prize to the quarterly league leaders.